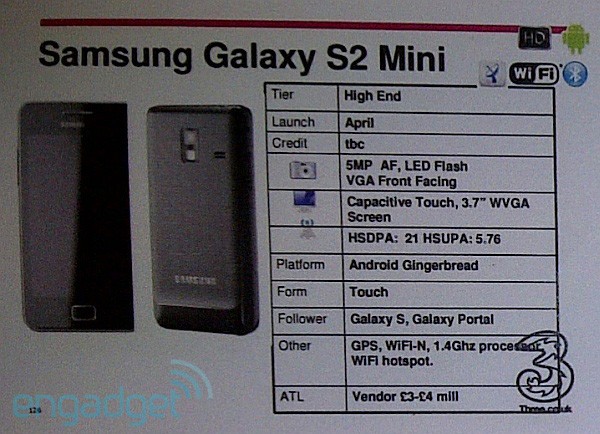 A juicy leak from Three UK has revealed a bunch of release dates, as well as our first look at the Samsung Galaxy S2 Mini.

The original Samsung Galaxy S Mini is still just getting its feet wet in the UK, but the S2 Mini definitely bumps things up a notch. The screen has been upgraded to 3.7-inch WVGA, the camera’s now 5 megapixels (up from 3), and the processor cranked up to 1.4 GHz from 600 MHz. That’s a pretty beefy upgrade, but we can expect the price point will rise appropriately when the S2 Mini launches in April.

A few other goodies nestled in Three UK’s spring roadmap, including the Wi-Fi BlackBerry PlayBook, due to drop in June (a little late, isn’t it?), and the HTC Flyer in May. On the handset side, the Samsung Galaxy Pro, the Samsung Galaxy S II, Nokia E7, Sony Ericsson Xperia Arc, Xperia Play, and HTC Desire S are targeted for April; the HTC Wildfire S, the Nokia X7, the HTC ChaCha, and LG Optimus 3D for June.

That’s a pretty beefy chunk of information in anyone in the UK, and should give us a rough idea of when to expect the lot of these handsets elsewhere in Europe.

Attention clumsy, power-users out there, a case has been made just for you. XPAL is introducing a new line of...