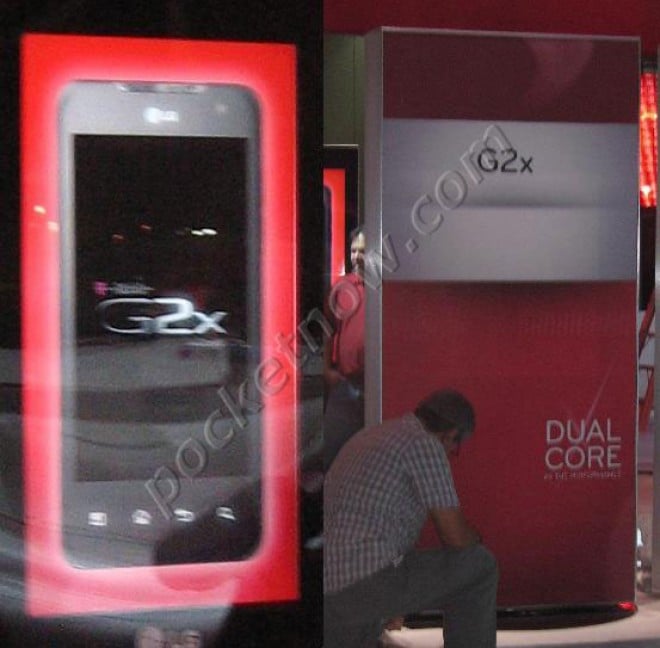 Look what we have here. The T-Mobile G2x has yet to be announced, but the picture says it all. What’s likely to be just a T-Mobile branded version of the LG Optimus 2X (definitely not a bad thing) will soon be unleashed to the US of A. Now all we need is the official announcement.

So far, the G series of T-Mobile Android phones have had physical keyboards, but you’ll have to make do with the onscreen keyboard on the G2x. If the specs remain the same as the Optimus 2X, typing on the nice 4 inch display should work just as well. We can also expect the NVIDIA Tegra 2 to power the device, along with an 8 megapixel camera with 1080p HD video recording, 1.3 megapixel front-facing camera,  HDMI port, all running on Android 2.2 Froyo. The handset will most definitely be receiving some Gingerbread goodness down the road, but Froyo will do just fine, since we’ll be busy gawking over the impressive spec sheet.

The handset it no chump, but the competition is now heating up with similar spec sheets, and some even sport glass-free 3D displays. Throw in the fact that Magenta is going to get swallowed by AT&T next year, and you may find yourself on the fence if you’re not sure you want to be within AT&T’s grasp. Still, the G2x will appeal to many people out there, and while it may not have a 3D display, which is still very much a gimmick at this point, there’s enough to like the G2x on its own.

Since we’re going on the spec sheet of the Optimus 2X, we know little about the T-Mobile optimizations put in place. One thing that shouldn’t be left is out HSPA+ support, and it certainly wouldn’t hurt if the G2x shipped with stock Android. LG’s custom UI is one of the most tolerable skins seen on Android devices, but hopefully Magenta will stick to the G-series roots and leave the UI untouched.

If I choose to stick with T-Mobile, the G2x will definitely be my next handset. If I decide to jump ship, however, the EVO 3D will my all mine.

So you went ahead and got Verizon's first 4G LTE phone, the HTC Thunderbolt, eh? The phone is great, but...