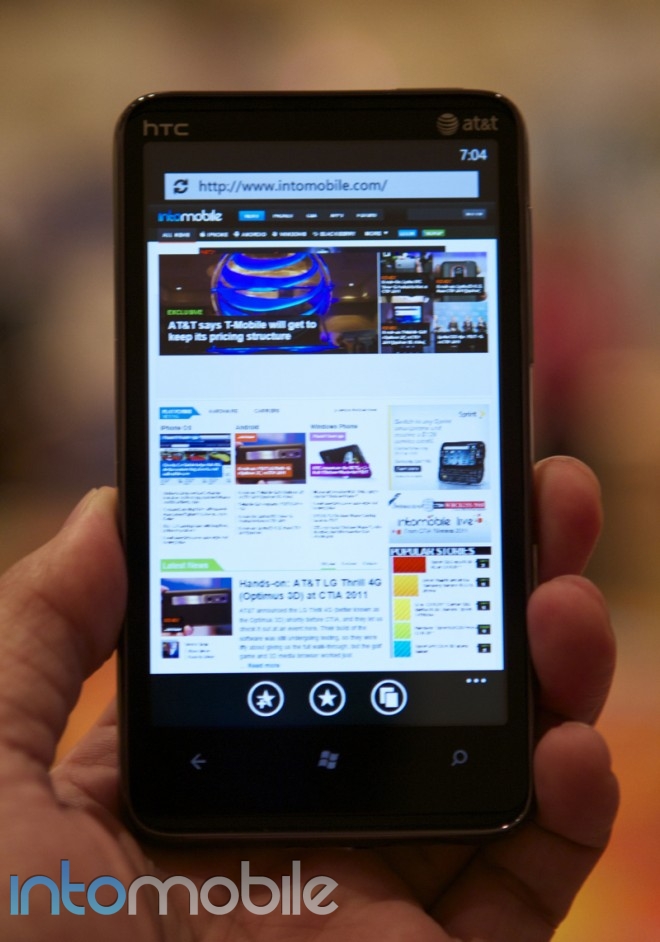 The HD7S just became official for AT&T and we were able to get our hands on an untethered unit. That’s right, folks, IntoMobile is giving you the first look at this Windows Phone 7 smartphone coming to AT&T within the next few weeks.

That’s not necessarily bad but some may be disappointed that AT&T hasn’t blessed this as one of its 4G devices. You’re looking at standard AT&T 3G speeds, so your milage may vary.

The AT&T HD7S rocks a 1 GHz Snapdragon processor, 5-megapixel shooter, WiFi, GPS, Bluetooth and all the other things you expect from a device of this class. As you would expect, this comes with the HTC Hub, which includes the handset maker’s specialized apps and widgets.

There’s not too much to get excited about the AT&T HD7S, to be honest, as it’s just a repurposed HD7 for AT&T’s bands. Still, it looks like a solid device and if you wanted to check out Windows Phone 7 on a large screen, this may be the device for you.

What do you think, friends? Is this just some warmed over hardware or is it spiffy enough to tempt you. Let us know in the comments friends.

Check out our photo gallery and video below.

AT&T announced the LG Thrill 4G (better known as the Optimus 3D) shortly before CTIA, and they let us check...