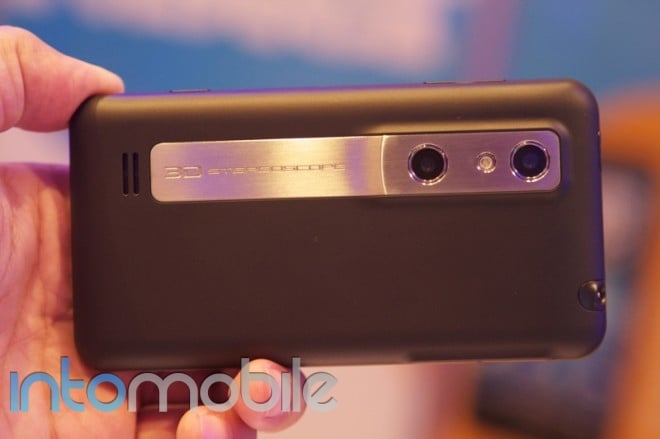 AT&T announced the LG Thrill 4G (better known as the Optimus 3D) shortly before CTIA, and they let us check it out at an event here. Their build of the software was still undergoing testing, so they were iffy about giving us the full walk-through, but the golf game and 3D media browser worked just fine. Even the hardware was in pretty early stages, considering the unit on demo didn’t have any branding.

The LG Thrill 4G runs on AT&T’s HSPA+ network, and supports glasses-less 3D in a few select apps. It also comes with twin 5 megapixel cameras so you can shoot your own 3D still pictures and video. It boasts a dual-core 1 GHz processor, 4.3-inch WVGA display, and the usual fare like Wi-Fi, GPS, and 3G. there’s 8 GB of internal storage on there plus microSD, and 512 MB of RAM. The Thrill is currently running Android 2.2, but who knows what’ll be crammed in there come launch time.

I had played with the Optimus 3D a little bit at Mobile World Congress, and not much had changed since the device found its way to North America. The glasses-less 3D display indeed works, but I still find it gimmicky, and of questionable interest to third-party app developers. End-users who have already invested in a 3D TV may love to have a stereoscopic camera on their phone, as well as be able to shunt out their created media to the big screen over DLNA. I’m glad someone’s making the first step to get 3D displays and technology onto smartphones, and it may very well become a feature we take for granted in a few years, but for now the success of the Thrill 4G will rely entirely on eager early adopters.

Anyway, here’s a quick demo, and a couple of snapshots of AT&T’s 3D Android wonder.