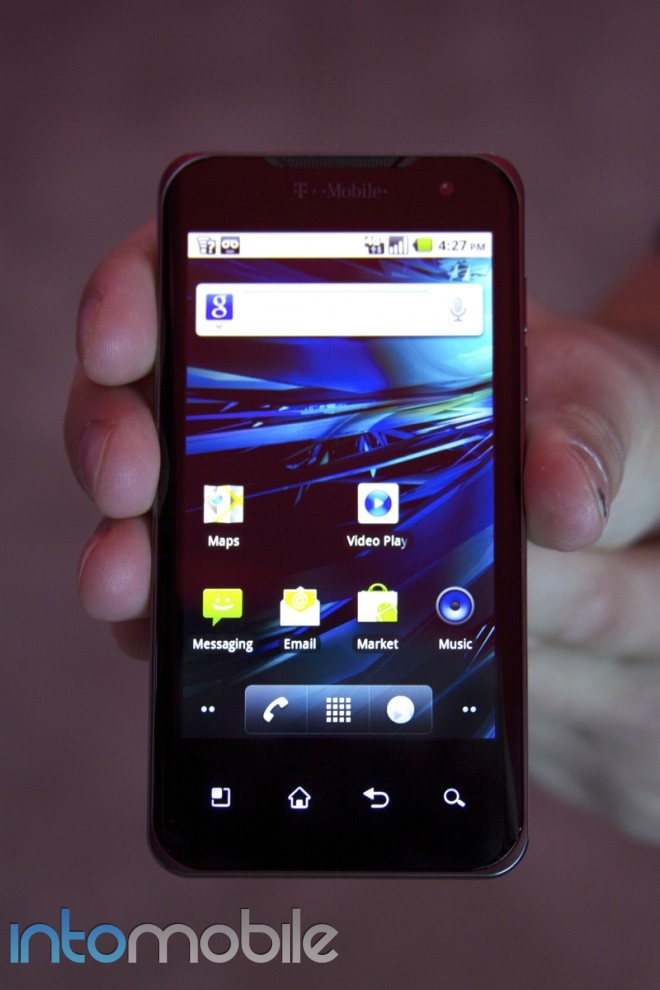 The T-Mobile G2x was just announced and you know that the IntoMobile team got some hands-on with it at the CTIA 2011.

The T-Mobile G2x is essentially the LG Optimus 2X but with a few slight differences. The biggest one is that this unit will be able to utilize T-Mobile 4G network for faster mobile data speeds.

The T-Mobile G2x will only have a max download speed of 14.4 Mbps down, which may disappoint some considering that the Galaxy S 4G can get 21 Mbps download speeds. Still, even at half of 14.4 Mbps in real-world, this should be a fast downloading machine.

The T-Mobile G2x is powered by the dual-core Tegra 2 chipset and this provides a boatload of features including the ability to record video at 1080p and play it back at 1080p. Sure, the screen can’t display that but you’ll be able to stream it out via the HDMI port.

The handset will come preloaded with the Tegra Zone app, which aggregates apps that are specifically optimized for the NVIDIA processor. This means games like Fruit Ninja and Dungeon Defenders will have better graphics on Tegra 2 devices than on other smartphones.

I noticed that LG has tweaked the software on the T-Mobile G2x from when I saw it as the Optimus 2X, as it’s more of a bare-bones Android UI. Still, it will launch later this spring with Android 2.2 so let’s hope a Gingerbread update isn’t too far down the road.

Of course, the biggest question nowadays for anything related to T-Mobile is what will happen when/if it is acquired by AT&T. Buying a new handset with a two-year contract, even one as stellar as the T-Mobile G2x, could be a risky proposition when the company you’re buying from will soon become AT&T.

I have to say that I loved the Optimus 2X and its 8-megapixel camera was good enough for me to print out and frame a picture. I know there’s a lot of uncertainty around the carrier but this is going to be a device worth getting despite the rocky future. Check out the video below.