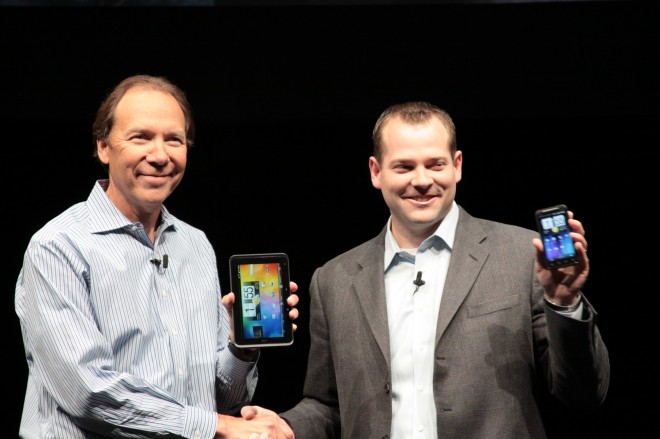 Today at CTIA 2011, Sprint officially announced the HTC View 4G, better known as the HTC Flyer. Not a huge surprise given recent rumours, but good news nonetheless. It goes on sale sometime this summer, but there aren’t any prices or specific dates just yet.

The HTC View 4G has a 7-inch 1024 x 600 display, 1.5 GHz processor, 1 GB of RAM, 1.3 megapixel camera on the front, 5 megapixel camera on the back, 32 GB of internal storage plus microSD, Wi-Fi b/g/n with hotspot and DLNA support, and connects to both 3G and WiMAX networks on Sprint. It currently runs Android 2.4, but there are plans to upgrade to Honeycomb in the near future. Its signature feature is a pen that works with the capacitive display, enabling users to sign documents, annotate e-books, and add notes to screenshots. We’ve got a hands-on over here if you want to take a look at some live video, but we’re probably going to grab some more as they’re showing it off here at CTIA.

More news to come from Orlando! Stick around!

Mobile app store GetJar released data from their commissioned global survey, giving insight into the "preferences and attitudes of mobile...