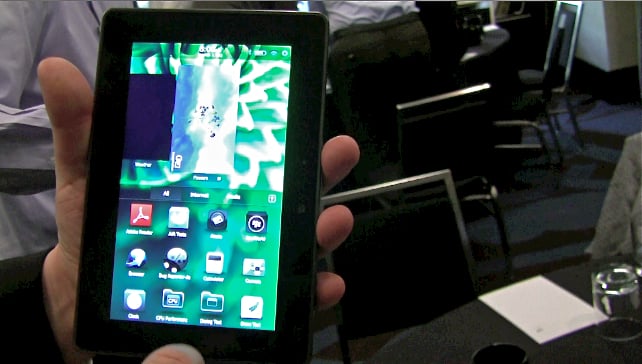 By now, you’ve probably heard that the BlackBerry PlayBook will run Android 2.3 apps in a “sandbox” or emulator environment and my quick, pool side reaction is that I don’t like this because I believe that it is a short-sighted move that undercuts Research In Motion’s QNX platform before it has any time to gather steam.

I get the motive behind it: The BlackBerry PlayBook will now have access to Android 2.3 apps at launch, meaning that the newly-built QNX platform won’t be app-less (or near app less) at launch. This should also entice developers to bring their apps to the BlackBerry PlayBook because this should just be a platform layer that’s easy to implement. This is covering all the bases.

I think it is a good move in the short term but I don’t like it because it seems like RIM doesn’t have confidence in its QNX or WebWorks platform. In short, RIM is being scared and it’s not being bold.

I was a big fan of the BlackBerry PlayBook when it was introduced near six (!) months ago and I felt that the QNX platform was an extremely positive step that should trickle down to the smartphones. Yes, building a new platform from the ground up is extremely tough, as is attracting developers to this, but RIM had WebWorks as its ace up the sleeve.

WebWorks was billed as RIM’s solution for web developers who weren’t very familiar with native development. It is solid for those who are not yet committed to giving the unproven QNX a go.

By giving developers the option to just repackage and re-submit Android apps into the BlackBerry App World, I believe RIM is showing a disturbing lack of faith in its platforms and in web apps. Android apps will be running in an emulator environment too, which means only those that aren’t complex will run well, so I don’t know how that helps consumers beyond the app store number race.

Of course, developers have to repackage their Android apps for the BlackBerry App World but I’m unsure how many resources it has to ensure that these programs run smoothly on the BlackBerry PlayBook. RIM is trying to cast a wide net with Flash, AIR, native app, Android and Webworks development and I’m sure that app makers will appreciate the options but I’m unclear if this will lead to amazing experiences for the end users.

That’s why this seems like a half-hearted, stop-gap measure to spur the developer ecosystem. Having the number of apps to brag about is cool but so is having a smaller number of high-quality apps that people actually want to use – I don’t care if that’s a native experience or a web-based Webworks version.

Microsoft was able to spur its developer ecosystem by paying people to create apps for Windows Phone 7 and, while I don’t expect RIM to throw out that kind of coin, I believe that RIM focusing on what it does well is better than a jack of all trades, master of none approach.

Well friends, let me know why I’m wrong in the comments.