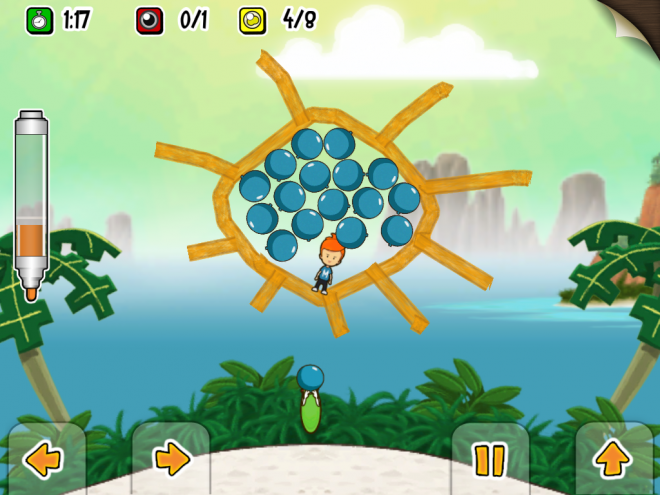 If you had the ability to use a magical marker in order to interact with the real world to build bridges, stairs, and large marker-boulders to crush your enemies, would you use it for good or evil? If I received any sort of power, you can guarantee that I would use it for now good. That’s why it’s good that a kid named Max was give this power in his game, Max & The Magic Marker.

Max & The Magic Marker is a puzzle-platform game that has you playing as Max who one day received a mysterious marker in the mail. He did what any child would do and he drew a monster, which then comes to life and jumps into another drawing. Max then draws himself onto the page and begins to chase down the moster he created.

Each level has you moving Max through it in order to reach the other side and move on to the next challenge. Each level offers three stars that you can collect: one for time, collecting bubbles, and collecting special black bubbles. During his adventure, Max will need to use the power of his magic marker in order to proceed over water, to protect him from harmful rain, and to attack enemies.

After playing it for a couple of hours this morning, I can tell you the drawing mechanic is spot on and the game doesn’t get dull as later levels require you to use your noggin’ in order to complete the level. The game comes with a total of 58 levels and the game is available for both the iPhone and iPad, although I feel the iPad played much better due to the additional real estate.

Apple releases iOS 4.3.1 for the iPhone, iPad and iPod touch

Apple released the latest version of iOS for the iPhone, iPad and iPod touch today. The update is a maintenance...