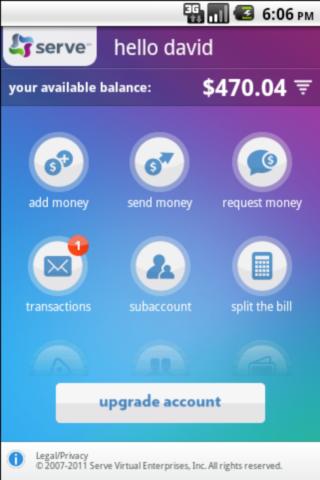 American Express just launched a new initiative called Serve, which will allow users to link their American Express or other debit cards to a single account, and pay for goods and services solely with an iPhone or Android handset. As you might expect, you can send and request money from your contacts in the app, as well as add money to the account or transfer it to another. Serve also has the ability to set up sub-accounts, which is nice for employers who want to set limited expense accounts, or parents who want to know how their kids are spending money. There’s also a neat Split the Bill calculator, for those times you want to figure out how much everyone owes once tips are included.

Serve isn’t quite as flashy as Square, which allows phones to interact with swipe cards, or PayPal with Bump functions, but American Express is big enough to make mobile payment something ubiquitous. This is only the first step for the platform, and I suspect it will be taking advantage of NFC when and where it becomes available. It looks like MasterCard, Citigroup, and Google are already on that train of thought.

For now, Serve is only available in the U.S., leaving us Canadians out in the cold. Not that we weren’t in the cold before, or anything. Besides, we have Zoompass up here, which is basically the same thing. You can find the app in the Android Market or iTunes below, just make sure to register your cards and account with Serve first. They’ll send you a card which will work at ATMs for those times you need real money.