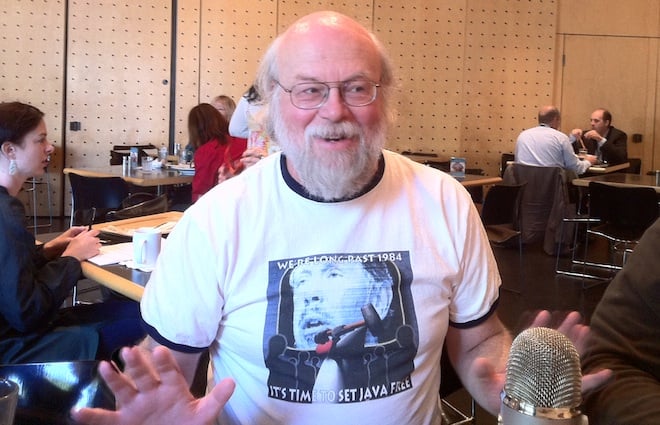 Google has just hired James Gosling, the man who invented the Java programming language while working at Sun Microsystems, and while we don’t yet know what his exact role with be, Gosling says it best on his personal blog (cached version): “I don’t know what I’ll be working on. I expect it’ll be a bit of everything, seasoned with a large dose of grumpy curmudgeon.” His cynism is warranted since Google is in an active legal battle with Oracle, the company that bought Sun and absorbed all of their patents. Google has been accused, and let’s be honest they’ve been caught as well, taking portions of source code from damn near everywhere and using it to build Android. Every once in a while they throw an open source dump of Android over the fence of their Mountain View office, but that’s not something that really gets you fans in the open source community.

If we had to take a guess at what Gosling is going to work on, we’d say he’ll be tasked with making Dalvik, the Java like engine that powers Android, more power efficient, faster, and less prone to lawsuits from one of the biggest, meanest companies on the face of this planet. Android devices are still chided for their battery performance, despite the operating system closing in on 3 years of age this coming fall.

Here’s also hoping that Oracle doesn’t try to get him barred from working at Google since patent RE38,104 (“Method and apparatus for resolving data references in generated code“) was invented by Gosling, but was left property of Sun, which is now Oracle. It’s always dirty legal mumbo jumbo that holds innovation back. We wish James the best of luck at his new post and hopefully he can make that damn lag that most Android devices develop after a few weeks use disappear.

Nearly three months ago at the Consumer Electronics Show in Las Vegas LG announced the Optimus Black. It was dubbed...