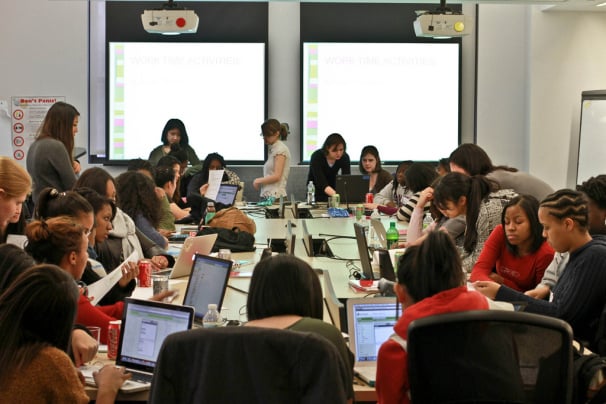 The debate on why there are so few women in the field of science and technology rages on, but Google is being proactive and is teaching young girls in New York City how to develop Android applications.

The 12-week program pairs high school girls from New York public schools with volunteer mentors to introduce them to high-tech entrepreneurship. Participants learn the basics of programming, design a user interface, develop a prototype app and business model, and cap it off with a presentation to a panel of judges and venture capitalists.The winning team’s concept will be developed by pros with input from the girls and released in the Android Marketplace. Through this process, the mentors are teaching the students to become creators rather than just consumers of technology.

It sounds like a great program that could spark and sustain the interest of young women who may or may not have had any plans to delve into the field of technology. And the fact that they are actively developing and creating technology versus just passively consuming it is also helpful.

Perhaps this is precisely what this industry needs: a proactive and fun learning environment that encourages young girls to get creative and see what they can do with technology. The PC Mag report says, “Even the shier girls spoke confidently about their projects and process.”

The program has already been adopted in Southern California and in the San Francisco Bay Area, so hopefully it will continue to spread throughout the country now that it has finally reached the east coast. Who knows, in less than a decade we might start seeing more of a balance between men and women in a field that has been predominantly occupied by males.

WebOS 3.0 SDK is out now, software developers get going

If you've been wanting to develop some hot apps for the new HP TouchPad with webOS 3.0, now is your...