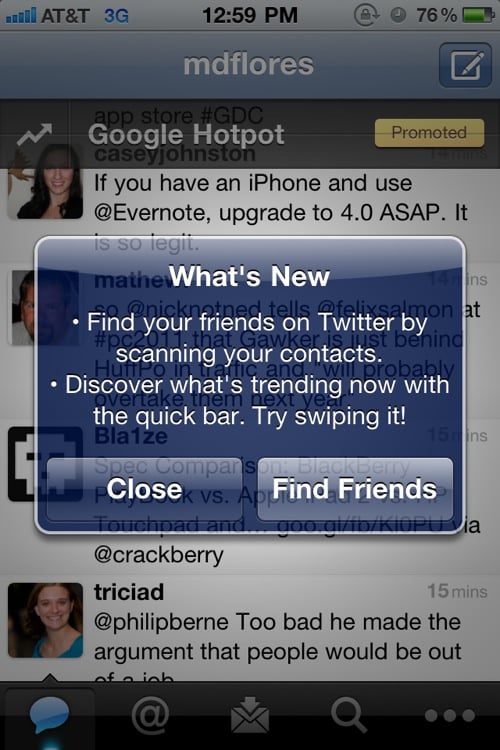 Several weeks ago, Twitter for iPhone was updated with a number of new features. Perhaps the most prominent and undoubtedly hated feature was the QuickBar, which quickly earned the Twitter hashtag #dickbar. It was permanently stuck on your main timeline showing you trends you didn’t really care about – trends that were typically generated by crazy teen fads or weird events going on elsewhere. Users decried the addition of the QuickBar, but instead of removing it, Twitter simply adjusted it by making sure it didn’t overlap tweets.

Today, Twitter announced that it is finally getting rid of the ugly, obtrusive and obnoxious QuickBar. The company says in its blog:

Rather than continue to make changes to the QuickBar as it exists, we removed the bar from the update appearing in the App Store today. We believe there are still significant benefits to increasing awareness of what’s happening outside the home timeline. Evidence of the incredibly high usage metrics for the QuickBar support this. For now, we’re going back to the drawing board to explore the best possible experience for in-app notification and discovery.

Yes, it is important to know what’s going on outside of one’s home timeline, but that’s what other news outlets are for. The value of Twitter is that users get to pick and choose friends, celebrities, news sources and important figures so that their stream contains exactly what they want to learn and discover every time they fire up the app. And while the usage metrics for the QuickBar are high, how many of those might have been accidental touch events or users hoping that by messing with it somehow, it will go away? That’s speculative, of course, but Twitter and blogs and even iTunes reviews were obvious in their resentment of the QuickBar.

If you’ve abandoned the official Twitter for iPhone app because of the QuickBar, today is the day to go back. Oh, and Jack Dorsey, if this had anything to do with you coming back, I love you.

Now if you’d all bring back the option to use our own link shortening services, that’d be great. Thanks.