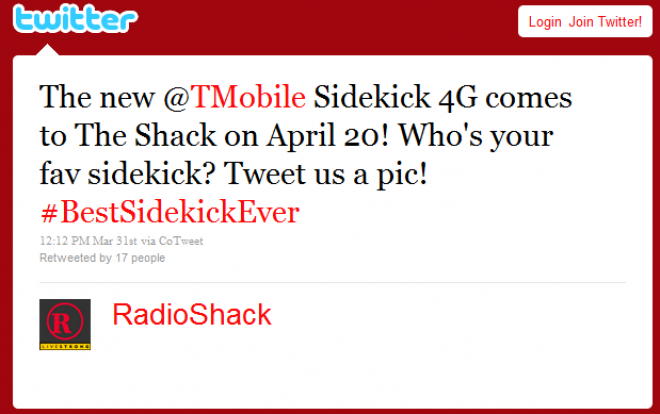 It may be April Fool’s day, but Radio Shack looks to be speaking the truth with one of their latest tweets regarding the upcoming T-Mobile Sidekick 4G. If you’ve been waiting for the Sidekick to get a breath of new life, then you won’t have to wait much longer, as Radio Shack claims that the new handset will be available on April 20th.

It’s not surprising that many people were a bit skeptical when they heard Samsung would be creating the next generation Sidekick, but the device looks solid. Samsung kept the traditional Sidekick aesthetics, brought the specs up to that of a mid-ranged/standard smartphone, added in some HSPA+, and let Android run the show. Doing this makes the new Sidekick a useable smartphone by giving it access to the Android Market, while retaining the look and feel of the original product line.

Does the April 20th date ring a bell at all? If you said yes (and aren’t laughing), then you may remember that the T-Mobile G2x and G-Slate were also rumored to be released on this date. Along with the as yet unannounced HTC Pyramid, T-Mobile is readying a great lineup that looks like it will fare well against the competition this year. If the AT&T-Mobile acquisition does end up going through, Magenta will be going out with a bang as an independent carrier.

If T-Mobile launches the Sidekick, G2x, and G-Slate later this month, it could either be that the carrier wants to get their shiny new devices into the hands of the customer before the competition releases their rivals, or that we may see a couple more devices launch by the time summer hits.

The Sidekick may not be everyone’s cup of tea, but there’s plenty of people who’ve been waiting for its return. Pricing the handset under $100 ($99 after $50 mail-in rebate) certainly won’t hurt the sales, either.

Would you consider grabbing the new Sidekick when it debuts?