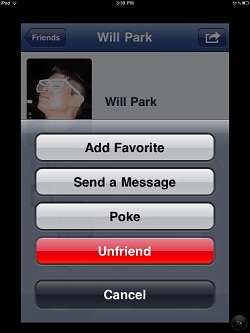 The Facebook iPhone app has just received a substantial update and the 3.4 version allows you to unfriend on the go, as well as adds improvements to the location-based check-in service known as Places.

The updated Facebook iPhone app now lets you ditch your pals on the go. As you can see in the video (video below), the unfriending process is pretty simple, as you merely have to click on a friend, hit the options menu, click on “unfriend” and then confirm it. It’s good that Zuckerberg is letting you anti-social on the go.

For those of you who aren’t aware, Facebook Places is kind of like other check-in services like Foursquare and Gowalla but not as full featured. That’s changing a little bit with the 3.4 version.

First of all, the updated Facebook iPhone app now lets you check in to events. If you’re at a birthday party, it will scrub your events calendar and your location to let you check in to it if you’re at the right time and place. I created a fake one for the demo video so don’t worry – You’re all invited to the next IntoMobile party.

The updated version also includes a neat maps view in Places, so you can track where you and your pals have been. This isn’t anything revolutionary that we haven’t seen from the likes of Foursquare but I’m thinking this could be used by third-party developers for some interesting stuff. LocalMind, for example, created an awesome Q&A service based on location using Foursquare’s API and I think similar services could spring up from Places in the future.

Other than that, the 3.4 version also includes some subtle tweaks to the user interface of the news feed and the notifications have also been altered. There’s no word on when this will hit the Android version, but I hope it’s sooner rather than later.