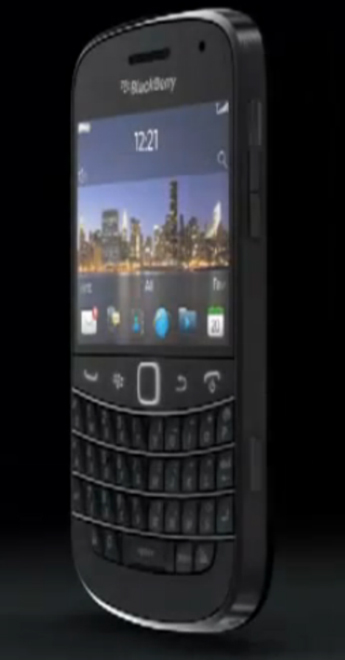 The other day, BlackBerry OS 6.1 was leaked, and ever since folks have been busy rooting around for something interesting. A whole batch of videos have been wrung out, the most exciting of which is a full hardware tour, mainly since we’ve only ever really seen the device from the front. The frame originally looked mostly like the original, big, beautiful Bold 9000, but there are a few tweaks. For one, there’s a new third key jammed in the middle of the volume rocker, whose purpose is a bit of a mystery. The key on top is now dab smack in the middle, rather than off to the right. Traditionally, that was the mute/pause/play key, but I imagine that function has moved to the new key on the right side, and the top is now for lock/unlock. I also don’t see the charging contacts on the bottom anymore, which means unless RIM surprises us with some inductive charging tech at BlackBerry World next month, the Bold Touch will rely on old-fashioned micro USB charging. (Update: Oh hey, I forgot about this render, that showed the charging contacts and all angles pretty clearly.)

From what we’ve seen in leaked roadmaps, the BlackBerry Bold Touch (code-named Montana or Dakota), will have a 1.2 GHz processor, 768 MB of RAM, 8 GB of internal storage (plus microSD), a 2.8-inch 640 x 480 display, a 5 megapixel camera with a 720p video recording and flash, Wi-Fi b/g/n with mobile hotspot, a gyroscope for augmented reality apps, and a near-field communications chip for contactless payments (tap and go, basically).

By and large, the other videos are the same kind of thing you would see on the Torch or any other OS 6 BlackBerry. The added emphasis on Twitter is a nice touch, and the long-neglected BlackBerry Wallet makes an appearance (likely the app to be handling credentials for NFC).

It’s starting to look like the 9900 will be my next BlackBerry, since I miss the bigger keyboard and better battery life after using the Torch for awhile. What about you guys, is this phone looking ripe for the picking?

comScore is showing off their survey numbers for December through February, and of the 30,000 U.S. smartphone owners surveyed, a...