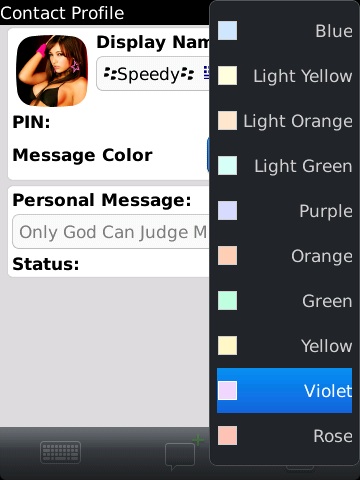 A few glimpses of the upgraded BlackBerry Messenger app launching in OS 6.1 have snuck out, and though it mostly looks the same as what we have now, you can now add a colour to particular contacts so incoming messages are clearly recognizable. I’m going to guess that these were somehow ripped from the OS 6.1 leak a few days ago, but you have to have a device that can actually run the app, which is a much trickier prospect (since this won’t run well on any OS 6 device currently available).

BBM is the proprietary instant messaging client loaded on every BlackBerry, and runs through RIM’s Waterloo servers so messages are delivered with the utmost zippiness. Sent/read notifications are the big pull for folks, though third parties are quickly learning to emulate the feature in their own IM clients. BBM can also be used by developers to instantly add social elements to their apps, which strikes me as particularly handy for games that need some kind of multiplayer chat system. Solid support for groups, file sharing, and integration with the native contacts app cements BBM as respectable choice, but the exclusivity to to those who own a BlackBerry phone can be a bit of a pain. You never know though, it could end up coming to Android someday.

The last big update to BBM was pretty significant, adding functions like profiles and groups, and though we might not be seeing anything as extensive here so far, this is a pretty cursory glimpse; hopefully we’ll learn a bit more about RIM’s plans for BBM at BlackBerry World next month.

Is The Daily iPad newspaper failing?

The Daily iPad newspaper app is an attempt by News Corp to bring publications to the tablet age but how...