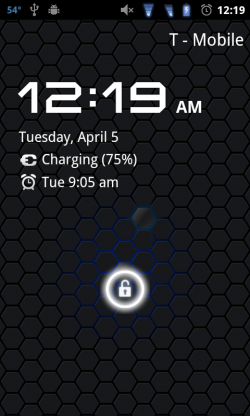 Running CyanogenMod 7 on your phone and want to give it more of a Honeycomb look? If you said yes then you may want to have a look at Morph, from MetaMorph, that will give you an Android 3.0 Honeycomb-esque lock screen. Sort of.

We touched on MetaMorph about a year ago, and it’s been going strong ever since. For rooted users only, the application allows you to modify certain parts of the software without having to flash a completely new ROM. The Morph Honeycomb lockscreen was released about two months ago in the form of flashable zip files, but since they were device-specific, a Morph was made to work across the board.

While you won’t find the nice animation when you touch the lock screen, or the ring surrounding it, you will get a similar looking lockscreen. There’s also a flashable zip file to change the clock font on the lockscreen to look a little more like Honeycomb’s.

MetaMorph reworks your phone’s framework within the system, so make sure to back up your current ROM in case you want to go back. This is nothing more than tweaking the lockscreen, mind you, and there are no real Honeycomb elements within it. It’s just a fun way to make CyanogenMod look like Android 3.0. After Morph is installed, your phone will reboot, and you’ll then see some extra options within the CyanogenMod lockscreen settings.

While this likely won’t happen to everyone, I had issues with the lockscreen’s background when using a static image – live wallpapers worked fine.

The instructions can be found at the XDA link below, and you’ll first need to download and install MetaMorph from the Android Market. Happy Modding!

Boost Mobile (an MVNO running on Sprint's network), has set up a landing page for the Samsung Galaxy Prevail. Specs...