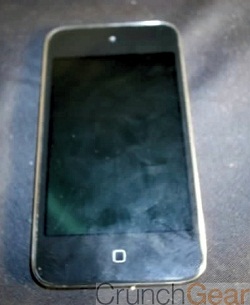 A few photos have leaked about a device which could be the next iPod touch and this could also give us a few clues about what the next iPhone will look like.

The biggest thing you’ll notice about this supposed next-generation iPod touch is that it ditches the physical home button in favor of a capacitive one. This isn’t vey surprising knowing Steve Jobs’ dislike for buttons but some questions may be brought up about how to interact with the device.

Well, we saw in the iOS 4.3 beta that Apple is testing some multi-touch gestures which eliminate the need for a physical home button on the next iPhone or iPod. It’s too soon to tell if this will be implemented with the next version of these devices but the foundation is there.

The next iPod touch also reportedly has an aluminum back, which jibes well with what we’ve heard about the iPhone 5. The iPhone 4’s double glass design definitely looked cool but there may have been too many issues with cracking for Apple to repeat that design.

The report also suggests that this will have 128 GB of memory, which would be a welcome boost for those who want to carry their entire library around. As you would expect, this also has a front-facing camera for FaceTime video calls but there’s no word on if the rear camera has been improved. Many of us expect the iPhone 5 to rock an 8-megapixel camera from Sony but that doesn’t necessarily mean that the next-generation iPod touch will receive that boosted shooter.

This device is running an old version of the firmware, so it may also be a prototype and not exactly representative of what the final product will be. It’s still a nice sneak peak at what we may see in the next iPhone.

iPhone 5 launching at the end of June this year?

There is currently a lot of speculation as to when the iPhone 5, the next iteration of the Apple smartphone,...