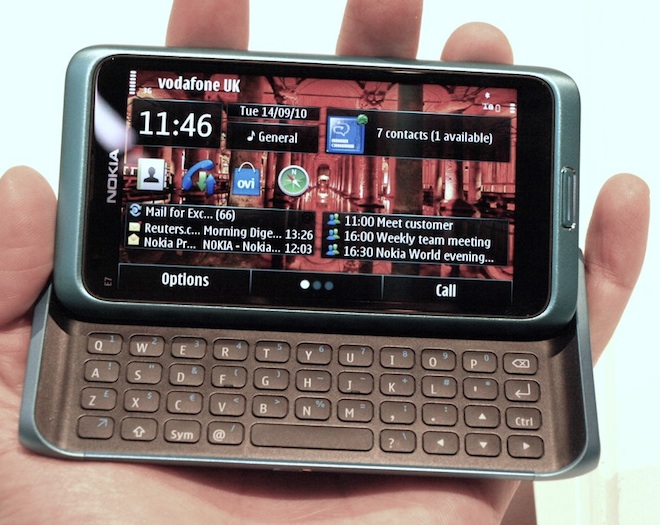 Nokia’s flagship enterprise focused device, the E7, has finally come to the United States after an excruciatingly long wait time. This thing was announced back in September 2010, so that’s what … over half a year for the boat to go from Finland to America? You can pickup the E7 from Nokia’s very own online store for $679, which is frankly obscene since the N8 is also available on the same website for $450, over $200 cheaper. The N8 and the E7 are, for all intents and purposes, the exact same phone, except that the N8 has a better camera and the E7 has a slide out QWERTY keyboard and larger screen. They both share the same guts, meaning quadband GSM/EDGE, pentaband 3G so you’ll be able to hop on a high speed wireless network irregardless of the country you’re in, WiFi, GPS, the same processor, the same amount of RAM, the same version of Symbian^3, the same everything.

Considering this handset is aimed at business customers then Nokia most likely made the assumption that companies have higher budgets than individuals. That’s a shame since most companies can actually save money if they went with RIM’s BlackBerry platform or even Apple’s iPhone, both are not only comparable in price, but depending on which model you go with and what length of contract you opt for, they can actually be even cheaper. At the end of the day though, none of this matters, since no one except for the most geekiest of people pay full retail prices for their mobile phones in the USA. It’s why Google’s Nexus project was canned, and it’s why no one wants to get a new device unless they can sign a contract and get a few hundred dollars shaved off the price tag. Welcome to the American market. It isn’t perfect, but it works. Barely.

The Nokia, Windows Phone 7 deal has the potential to be a major game-changer and the world's largest handset maker...