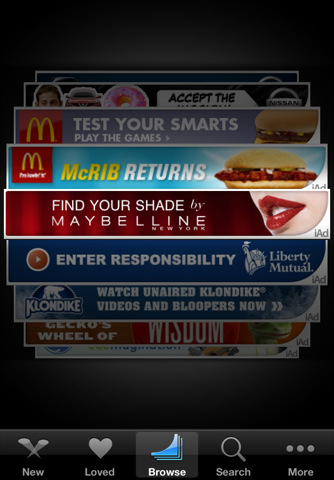 Yesterday, Apple released an app called iAd Gallery, which lets you browse through the library of rich iPhone advertisements currently being used in a variety of existing apps. You can see what’s new, search for a specific ad, browse through categories, or mark favourites. It sounds like a weird thing to do for what most consider to be a hindrance, but I guess Apple’s trying to promote ads that people actually enjoy for a change, which is a noble enough goal.

The story gets real juicy where Apple actually rejected a third-party app called Ads Tube which was planning to offer the exact same thing when iAds launched over the summer. Apple’s reason? Lack of functionality, apparently. That’s about par for course for Apple, though; earlier this week, they chased Toyota out of the Cydia store because they’ve got a raging hate-on for jailbreakers. Unfortunately, if you want access to the massive audience of app-hungry iPhone, iPad, and iPod Touch owners, you’ve got to play by Apple’s rules, however hypocritical they may be.

In any case, if you want to see the best and brightest results from Apple’s own dedicated advertisement platform, you can download iAd Gallery from the App Store.

Camera+, my favorite photography app for the iPhone, announced yesterday that it has reached 2 million sales through the iTunes...