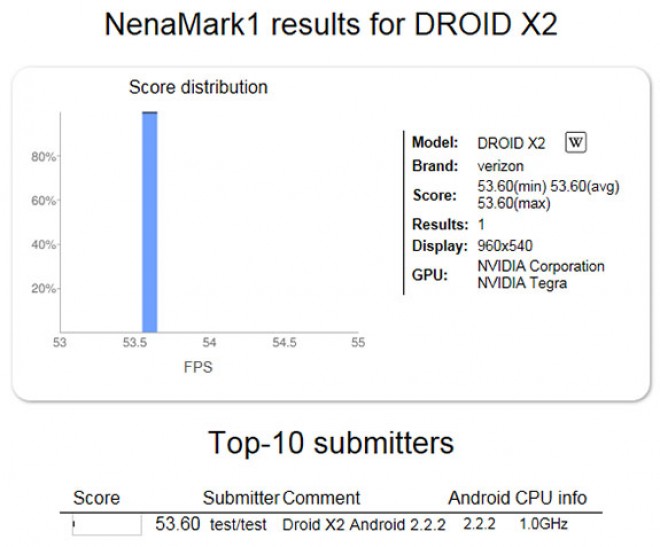 We’re still loving the existing Droid X from Verizon today, but in the mobile world, it may as well be the CLIQ. Ok, maybe not that bad, but technology moves fast, and we’ve been expecting a successor to the powerful handset sometime soon. With no official announcement of the DX2’s existence, we know very little, but recent benchmarks of what is purportedly the Droid X 2 have been found, and it looks like it will pack a punch. The kind of punch delivered by the Tegra 2 chipset.

We do know that the Droid X 2 has already passed through the FCC, and has had a photo shoot or two before, but new benchmarks reveal that the handset may differ in the specifications department. The rumored specs pegged the DX2 to sport a single-core 1.2 GHz CPU , and the same display (4.3 inch, 854 x 480 resolution), but we may actually see the handset ship with a 4.3 qHD display, and the NVIDIA Tegra 2 CPU.

When Motorola Droid 2 made its way to Verizon shelves, it wasn’t much of an upgrade from the original, so we weren’t surprised to see that the rumored specs of the Droid X 2 to change much either. If the new benchmarks are to believed, this won’t be the case, and we’ll see the DX successor pack a punch similar to the upcoming Droid Bionic. Whether or not it will be an LTE device is still anyone’s guess, but we wouldn’t even mind if it wasn’t.

The design of the Droid X is slick, thin, and light, and from the leaked pictures of the handsome device, the sequel hasn’t escaped that aesthetic. This is possibly the best looking Motorola handset we’ve seen yet, even if it’s full of hard edges and sports a huge footprint. It feels like a premium product that we applaud Motorola for creating. Now if we could only get them to make more hacker-friendly devices, we’d be some happy campers.

Attention to the clumsy, klutz's, and those with butterfingers, T-Mobile is offering the Motorola DEFY for free today, and today...