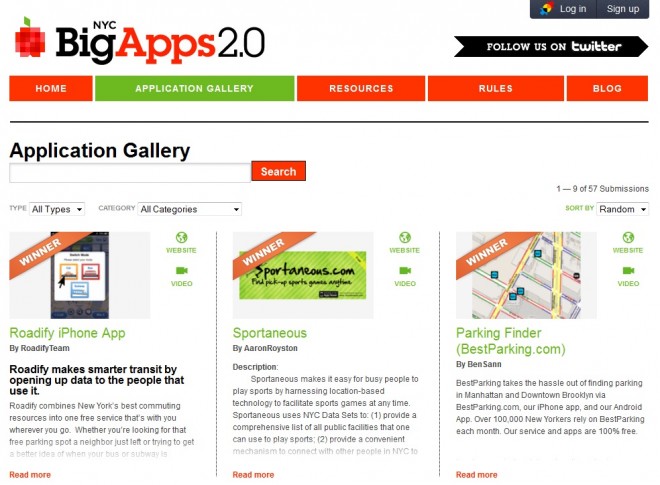 This one’s a few days old but I wanted to touch upon it because I think it’s pretty neat. New York City recently opened up its databases to mobile app developers and it has crowned some of its winners of its second BigApps competition.

What entails a winning app? Well, there’s some innovative stuff like Donteat.at which ties into Foursquare and the NYC databases to send you a text message whenever you check into a restaurant that has had a health code violation.

Another winner of the BigApps competition includes Appetition, which lets you create, support, and promote location-based petitions. This could be for serious things like putting a stop sign in near a school zone or for fun things like having your local doughnut shop carry a certain kind of pastry.

Another BigApps winner includes the Roadify iPhone app, which aims to make getting around NYC easier. This includes subway routes and travel times, as well as helping you find open parking spots.

You can check out the full list of winners here because I won’t go over each one. I wanted to give this story a shoutout because I believe that it’s an incredibly smart way for local governments to attack modern problems. By opening up NYC databases in a safe way to web and mobile developers, normally stodgy governments can see innovation flourish.

San Francisco is trying to do similar things and I believe this model can be replicated across the globe, potentially. What would be your ideal app related to government data?

Last November, Capcom released a free app called Capcom Arcade that brought some of the company's classic arcade titles to...