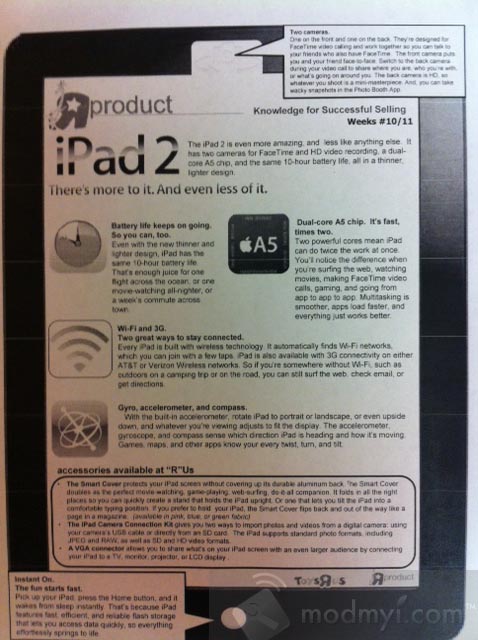 Apple’s iPad 2 has been selling like hotcakes everywhere it has landed, and it looks like another retail store will be added to the list of those carrying the magical tablet. However, it’s not your typical electronics retailer — it’s Toys ‘R’ Us! You know, where a kid can be a kid. So, does that mean the iPad 2 is for children, too? It seems like it, especially since word is that employees at the gigantic toy store are being trained for the device.

It shouldn’t come as a surprise to anyone who’s ever seen a child operating an iPhone or a first-generation iPad that the user interface is just that simple. Yes, even a child can do it. Fanboys of rival operating systems and tablets will cry out the laughable simplicity of the iPad, but that’s precisely why it’s so damn successful. The most technologically adept can do some serious work with it and create cool things with art and music, and for the casual and occasional user, it’s a simple consumption device. No instruction manuals needed.

Modmyi received the photo you see above and had this to say:

We received a tip this morning from a Toys R’ Us employee that the venerable children’s toy store will begin selling the iPad 2 next month. Although there have been rumors in the past about Toys R’ Us possibly carrying the iPad at some point in the future, this is the first we’ve heard from an actual employee that an iPad launch at the toy store is imminent.

If you’re looking to grab an iPad 2, be sure to check out our full hands-on review of the Apple tablet. And if you’re looking for excuses to pick one up because it’s just too far to get to your nearest Apple Store, AT&T store, Verizon store, Best Buy, RadioShack or Walmart, pretty soon you can add Toys ‘R’ Us to the list, too. Then you’re pretty much out of excuses unless you’re in the middle of the desert or somewhere in a tundra.

Next iPhone may have smart bezel for controls

The next iPhone may have some crazy, new interaction metaphors, as a new patent shows that Apple is working on...