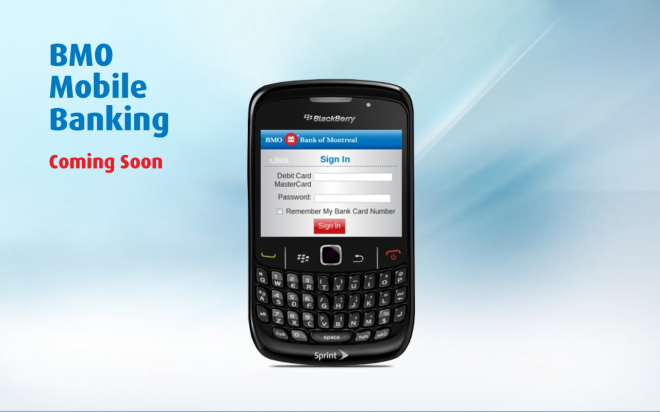 The Bank of Montreal is putting the finishing touches on the mobile apps for BlackBerry and iPhone, which should be going live by the end of the month. With it, you’ll be able to check your balance, make transfers, find nearby BMO branches (complete with turn-by-turn directions), plus push alerts for those time-sensitive bills.

BMO promises they’ll be including new features once the app is live, so it wouldn’t be surprising to see them integrate some Bump integration for peer-to-peer money transfers, or even playing nice with the near-field communications chip that’ll be found in the next batch of BlackBerrys, so you could pay by debit just by tapping your phone on a sensor. That’s mostly just wishful thinking, since BMO is my main bank for just about everything, but those features aren’t entirely outside the realm of possibility.

Competitors like TD, Scotiabank, and RBC have had mobile apps for awhile, while BMO has taken its sweet time to get into the mobile side of things, likely because of security concerns. Based on their early testing with NFC tags, however, I imagine they’ll hit the ground running and churn out some impressive features in good time.

The Wi-Fi-only BlackBerry PlayBook is launching April 19, and will be sold by carriers no less. What would they have...