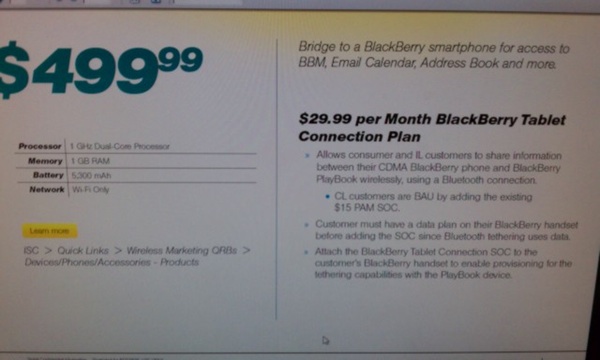 The Wi-Fi-only BlackBerry PlayBook is launching April 19, and will be sold by carriers no less. What would they have to gain by giving RIM’s first tablet any space on the shelf, since there aren’t any cellular plans or contracts to tack on? $30/month from users who want to enable 3G wireless connectivity on the PlayBook through their smartphone, apparently. This shot of a newsletter to Sprint sales staff clearly shows that it’ll cost $29.99 every month for the “BlackBerry Tablet Connection Plan”. The really worrying part is that this may not just be for 3G tethering, for Bridge as well, which at launch will be the only way to access basic functions like e-mail, contacts, and memopad on the PlayBook. The description says in vague terms that the plan would enable “customers to share information between their CDMA BlackBerry phone and BlackBerry PlayBook wirelessly, using a Bluetooth connection,” which could just as easily refer to Bridge as it does tethering. The clincher here would be if you had to pay this on top of any existing tethering premiums for use with PCs.

For those unfamiliar, the BlackBerry PlayBook runs on a dual-core 1 GHz processor with 1 GB of RAM, has a 7-inch 1024 x 600 display, twin cameras (5 and 3 megapixels, both capable of HD video recording), includes HDMI-out, Wi-Fi, Bluetooth, and GPS. The PlayBook runs on a new operating system based on QNX Neutrino, which can handle multimedia and multitasking like a champ, as well as facilitate app development across a variety of environments, including Flash (through Adobe AIR), web languages (WebWorks), native C++, Android, and Java (the runtime used in BlackBerry smartphones). We’ve got some hands-on time here, if you want to see it in action.

If this trend of charging extra for sharing data to a secondary Wi-Fi device continues, I don’t see the PlayBook (or other tablets that adopt the scheme) doing particularly well. There are third-party apps like Tether that will be able to provide a workaround, at least. The only saving grace I’m seeing with the PlayBook so far is access to Android apps, and even then, we have yet to see how well they’ll perform in the QNX Neutrino environment.

Out of curiosity, how many of you would be willing to tack on another $30 to your monthly bill for the privilege of granting 3G to your PlayBook? How about if you had to pay that for access to Bridge?

REVIEW: Sprint HTC Arrive – How does this CDMA Windows Phone measure up?

To avoid any obvious puns, the HTC Arrive is here! The world's very first Windows Phone comes to use from...