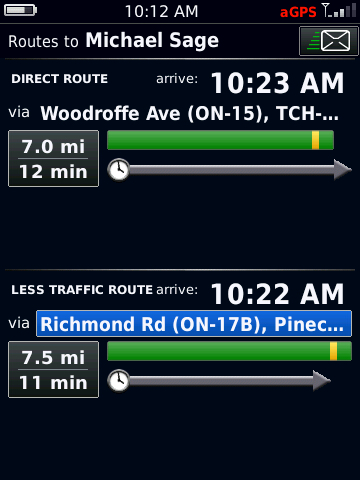 An updated version of RIM’s Traffic application hit the Beta Zone for a few weeks of testing, and is now live in the BlackBerry App World. All the same new features are there, like a UI overhaul, new options for which route to path, access to historic traffic data, a larger, more driver-friendly “next maneuver” view, and quick links to previous searches for those regular destinations.

BlackBerry Traffic is a little different from your standard GPS navigation app in that it farms up traffic data from BlackBerry devices currently and previously on the road. Based on that info, BlackBerry Traffic figures out how busy the roads are, and offers turn-by-turn directions to wherever you’re going. This strategy is all part and parcel of RIM’s acquisition of Dash Navigation, which did the same thing for its PND devices, but didn’t work so well because there weren’t a lot of users to draw data from.

BlackBerry Traffic is a nice twist on the usual GPS navigation app, and when they’re offering it for free, it’s hard not to give it a shot, even if Google Maps for Mobile is readily available. Go ahead and download the updated version here in App World.

You Don’t Know Jack to Test Trivia Skills on iPhone

You Don't Know Jack, a classic trivia video game with a smartass host, has been announced for the iPhone. It...