Nokia’s just announced two new devices and their latest version of Symbian. The first device, the E6, is one we’ve seen leaked countless times over the past few weeks so hardcore IntoMobile readers should be well familiar with the specs. Here’s a recap: 2.46 inch 640 x 480 pixel screen, yes, it’s touch, quadband GSM/EDGE, pentaband 3G that can do 10.2 Mbps HSPA, WiFi b/g/n, Bluetooth 3.0, FM radio, 115.5 mm x 59 mm x 10.5 mm body, making it fatter than the E71, weight of 133 grams, 8 megapixel camera with dual LED flash, 720p video capture at 25 frames per second, and a massive 1500 mAh battery that promises to deliver nearly 15 hours of talk time if you use 2G, 7.5 hours on 3G, and up to 31 days of standby time. The next device is the X7, something we thought was never going to hit the market since it was an AT&T exclusive that got canceled. It features a 4 inch 640 x 360 pixel resolution screen, 119.7 mm x 62.8 mm x 11.9 mm body, 146 gram weight, 1200 mAh batter, and it features the exact same camera and wireless radios as the E6. Both are expected to ship in Q2 2011 and curiously enough Nokia failed to talk about pricing. Update: Hat tip to @riptari who attended Nokia’s event in London and tells us the X7 is 380 Euros and the E6 is 340 Euros. 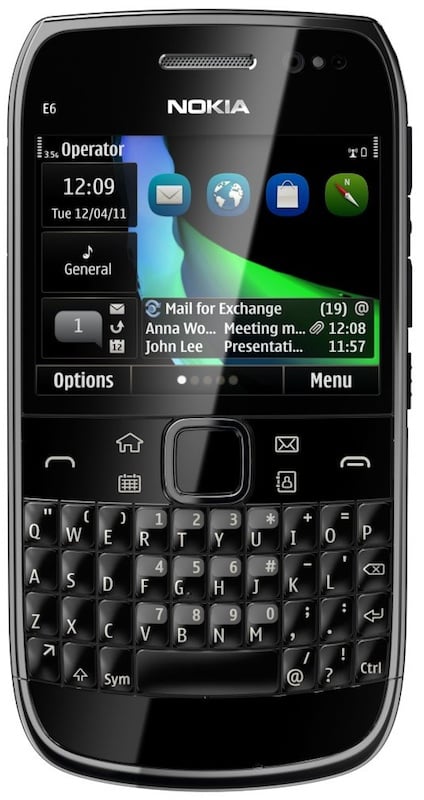 The real star of the show here however is “Anna”, the name Nokia are giving to their newest version of Symbian. We’ve already heard, on numerous occasions and as early as 4 months ago, the enhancements Nokia would be making to Symbian^3. The only updates we actually received today are photos of a new icon set and yet another brand name. “Anna” will have portrait QWERTY support, a new browser that’s faster and easier to use, the previously mentioned new icons, and … that’s it. It’ll come to all Symbian^3 devices over the coming months, which means all you N8 and E7 owners have to wait for an as yet to be determined amount of time.

We’ll let you know what we think of these devices once we get our hands on them, but we’re thinking we’ll come to the same conclusion that Myriam Joire of Engadget came to in her Nokia E7 review: “While providing excellent battery life, proper multitasking, and some unique functionality that will please power users, Symbian remains an unmitigated disaster, with a sluggish, frustrating, and cosmetically antiquated user experience.”

Update: For those of you curious about the internals, both of these devices have the same rickety old Broadcom BCM2727 processor that features the ancient ARM 11 architecture clocked at 680 Mhz. Both devices also feature 256 MB of RAM. Hat tip to All About Symbian [1, 2].