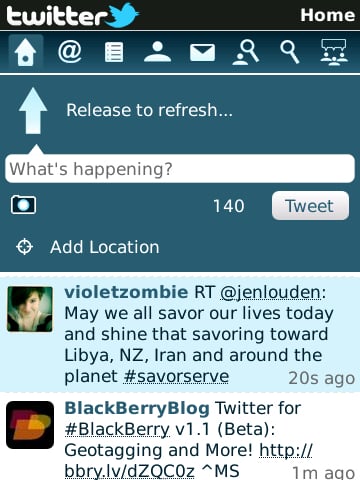 After being in a closed beta for a few months, an updated version of Twitter for BlackBerry has been released. Some of the main features in version 1.1 is geotagging support, so you can add your location to your tweets, and a new refreshing mechanism used by dragging your home feed past the top. Push @ mentions are also a very nice addition, for those who use hashtags regularly, autocomplete suggestions are now offered. Finally, there’s a bunch of new language support for Chinese, Polish, Czech, and Thai users.

As always, Twitter for BlackBerry lets you keep track of who you’re following on the social network, organize them into custom lists, easily preview pictures attached to tweets (as well as send your own through the native camera app), and share links that are shortened to fit within the 140 character limit. You can also see what topics are trending on Twitter, find individual users to follow, as well as send and receive direct messages, which are integrated with the native messages application.

I’ve been in on the closed beta, and am really happy with the geotagging support, though the push support for @ mentions was still spotty; hopefully the public release will be more reliable. Although the official Twitter for BlackBerry doesn’t stack up for many to third-party apps like SocialScope, push functionality is a big attraction for me, and RIM does a good job of tightly integrating your friends in your BlackBerry’s native address book. The only major thing missing for me now is support for multiple accounts and maybe some smoother transitions between tabs.

In any case, BlackBerry owners can pick up the latest official Twitter client from App World over here, where it will be available in the next 24 hours.