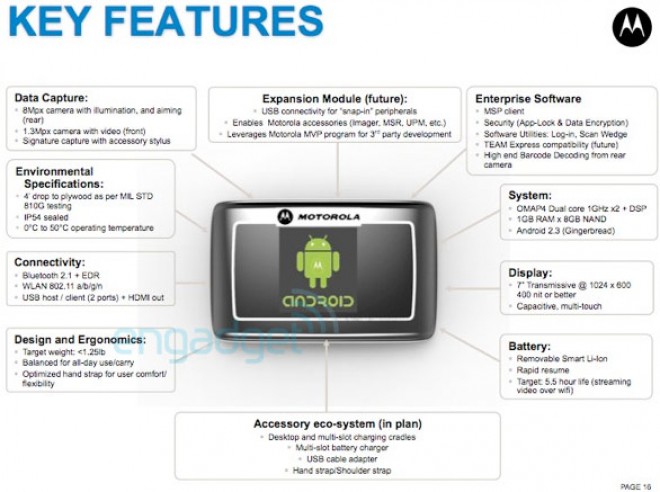 Motorola may have brought the world the first Android 3.0 Honeycomb tablet, but it looks like they have something else cooking in their “world’s first” kitchen, catering to rough-and-tumble tablet users. Rumor has it that a new Motorola tablet is in the works and will be a bit more enterprise friendly and it’s said to be rugged enough to take a decent beating.

We’re sad to say that the upcoming device won’t ship with Honeycomb, but instead will run on Android 2.3 Gingerbread. Sounds like a step back if you ask us. The device is also rumored to be rugged, which makes us wonder if this will be the Motorola DEFY of tablets, only high-end, and aimed at the enterprise. Word has it that this 7-incher should be able to endure extreme temperatures, dust, a four-foot drop, and it’s water-resistant to boot.

The device should sport a TI OMAP 1GHz dual-core 1GHz CPU, 1GB of RAM, 8GB of internal storage, HDMI port, 1.3 megapixel front-facing camera, and an 8 megapixel camera on the back that’s said to have “illumination and aiming” for scanning bar codes. You’ll also find the expected Bluetooth, WiFi (a/b/g/n), and USB on board as well. The rugged tablet has all its bases covered to be quite a nice tablet, but running on an outdated version of the Android OS is a sore spot that may not be all that appealing to some would-be buyers. Still, this a rumor, and we could see the rugged tablet ship with Android 3.0.

Beta testing of the device won’t even begin until October of this year, so the tablet likely won’t be out until sometime in 2012. In that time, the BlackBerry PlayBook will have made its case as the go-to business tablet. Could Motorola put the PlayBook in check? That remains to be seen, but we’re going to hope that it’ll be priced competitively when it officially debuts.

It’s going to be a while before there’s any confirmation of such a product, and hopefully Motorola will deliver the goods to the business world. Until then, we’ll be waiting eagerly to see how this rumor pans out.

How To: Install Android 2.3.3 Gingerbread update on Verizon Droid X

Attention Droid X users: There's supposedly an OTA update coming to your handset that will give you Android 2.3 Gingerbread...