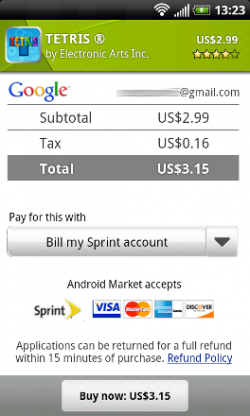 Well, it looks like Sprint is jumping on the carrier billing wagon, alongside T-Mobile and AT&T, and more recently three carriers in Japan. Sprint is rolling out carrier billing support for their Android phones, giving users the new option to purchase an application from the Android Market and charge it to their monthly Sprint bill. The new option should be rolling out as we speak, but may not reach all customers for a couple of days.

This is a smart move for Sprint, or any carrier who allows this. I personally find myself purchasing more applications on a regular basis with T-Mobile carrier billing – not everyone likes having to use Google Checkout.

With the three major US carriers now on board with Direct Carrier Billing, one has to wonder when Verizon customers will see this feature. While the option to bill apps to your monthly phone bill likely won’t determine what mobile provider you choose, having the US’ largest mobile provider absent from the carrier billing crowd is peculiar to say the least. There may be some kinks to work out between Google and Verizon to bring carrier billing to the table, but given that T-Mobile and AT&T customers have had said feature since last year, Verizon should jump on the chance to tack on more money to a customer’s bill.

Sprint and Google look to be getting quite cozy together, as the carrier recently announced that all phones from now on will support Google Voice with little setup. Could the two be cooking something up that has yet to be announced? Maybe. We’re sure Google would like to allow carrier billing on as many carriers as possible, and it’s working hard to do just that.

Will direct carrier billing make you want to purchase more applications from the Android Market?