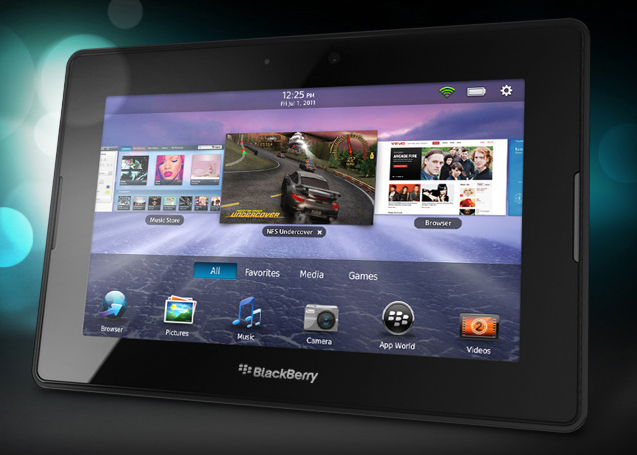 Last night an embargo lifted on press reviews of RIM’s upcoming BlackBerry PlayBook, which launches April 19. The vast majority of reviews say that even after spending six months in the public eye, the BlackBerry PlayBook’s operating system isn’t quite ready to compete with the other tablet players. Regardless, most of the final impressions lean towards positive, thanks to enterprise-friendliness, and solid-feeling hardware.

For those unfamiliar, the BlackBerry PlayBook is a 7-inch tablet with a 1024 x 600 display, dual-core 1 GHz processor, 1 GB of RAM, Wi-Fi, GPS, and 3G when tethered to a smartphone via Bluetooth. It includes twin cameras, which clock in at 5 and 3 megapixels, and both have HD video recording capabilities. HDMI-out is available for getting on-screen video to a TV, though external speakers give it some media power on its own. Prices start at $499 for the 16 GB model, and up to $699 for the 64 GB version. We’ve got some hands-on time here if you want to take a look.

There are a handful of bugs and missing functions in the tablet in its current state – all the usual stuff you’d expect from a 1.0 product, despite otherwise impressive hardware. On the plus side, it sounds like the PlayBook OS is getting updates regularly enough, which has led most to feel optimistic about the long-term potential for RIM’s first tablet. Time will also hopefully fix the lack of quality app selection (especially once Android emulation hits). Most view the 7-inch size as a good thing for portability, rather than a bad thing for media hogs, and again, over time it’s expected RIM will launch a 10-inch version for those looking for a big screen. Another consistent complaint across the board is a difficult-to-access power button that is overly recessed, and in some cases jammed.

There’s a sampling from the various reviews around the net after the jump. What do you guys think – disappointed to hear the mediocre reviews, or are you still sold on getting a PlayBook?

Motorola may have brought the world the first Android 3.0 Honeycomb tablet, but it looks like they have something else...