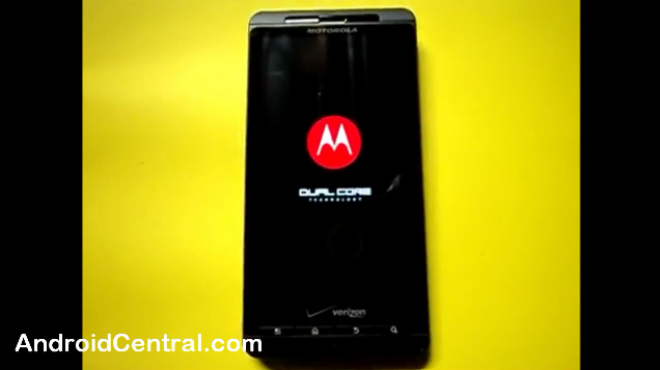 We had little doubt that the upcoming Droid X 2 would ship with a dual-core CPU, but just in case you had your doubts, a new video has appeared to put them at ease.

The boot animation below shows that the Droid X 2 will be sporting a dual-core processor. The handset in the video itself could just be the original Droid X, and the boot animation has been ripped from the DX2, but then again, pictures of the DX successor are virtually identical, so who knows? Whatever the case is, the DX2 will be quite a snappy device with its newer CPU innards.

While it’s not official, benchmarks of the Droid X 2 show that the handset may ship with NVIDIA’s Tegra 2 dual-core processor, making it one powerful piece of hardware. It’s interesting that Motorola has gone with NVIDIA (we’re not complaining) instead of Texas Instruments, as the original Droid X sported a TI OMAP single-core CPU. The Atrix also ships with NVIDIA’s beast, and this may indeed be the new trend for Motorola’s upcoming handsets.

The Droid X 2 will be one of the best alternatives on Verizon if you’re looking to grab a hot Motorola handset, but don’t care to pay up the extra money for an LTE handset, like the Droid Bionic.

We imagine the DX2 could ship with Android 2.3.3 Gingerbread, as the original just had a build of the latest and greatest leaked out to the world. But even the best hardware can’t escape crappy software sometimes, and we can count on MotoBlur to be pre-installed on the powerful new handset when it arrives.nWhether or not it will ship with the more tolerable, toned-down version is anyone’s guess, but since the original was blessed with the nicer version, we’d be surprised if the DX2 didn’t.

The Droid X 2 is looking to be one of Verizon’s best upcoming non-LTE phones, alongside the Incredible 2. Which will you choose?

When we were playing around with the HTC Sensation, we were impressed with the Sense 3.0 because it was beautiful...