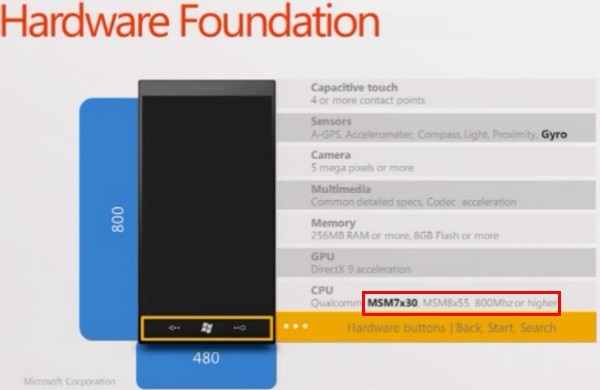 Microsoft’s mobile strategy is a bit odd. First they sold licenses of Windows Mobile to handset makers. That business model was badly damaged when Google announced Android and said they’d be giving it away for free. What separated Windows Mobile from Android however was the fact that Microsoft also provided drivers so getting a smartphone up and running in a lab and then on a store shelf would be a fast process. Now with Windows Phone 7 they still retain the license model, but they also enforce a strict set of hardware requirements. All Windows Phone devices currently on the market use Qualcomm’s MSM8x50 Snapdragon. They’re all running at 1 GHz, they all have the same Adreno 200 GPU. This is due to change, with Microsoft bumping up the minimum spec sheet to Qualcomm’s MSM8x55 or MSM7x30, both use the next generation Adreno 205 GPU. Both the MSM8x55 and MSM7x30 also support HSPA+, the only difference between the two is that the former can close up to 1.4 GHz, while the latter can only do between 800 MHz and 1 GHz.

Remember that rumor we reported on ST-Ericsson becoming one of the official recommended solutions for Windows Phone? Looks like that’s not going to happen anytime soon. We’re now left wondering when Microsoft will require support for dual core, seeing as how that’s the hottest thing in the press, but not yet a success in the marketplace. Then there’s NFC. It’s been rumored that support will come by the end of this year. We wouldn’t hold our breathe on that either, since it’s likely that Microsoft is pouring all of their engineering talent on getting the first Nokia Windows Phones out on the market as soon as humanly possible.

What do you think: Is this “closed” strategy of dictating spec sheets, charging licensing fees, and restricting UI customization a good or a bad thing?

Update: There’s also optional support for a gyroscope in the next WP release too.

Verizon has a handful of next generation Android handsets slated to arrive in the coming months. Among these new handsets...