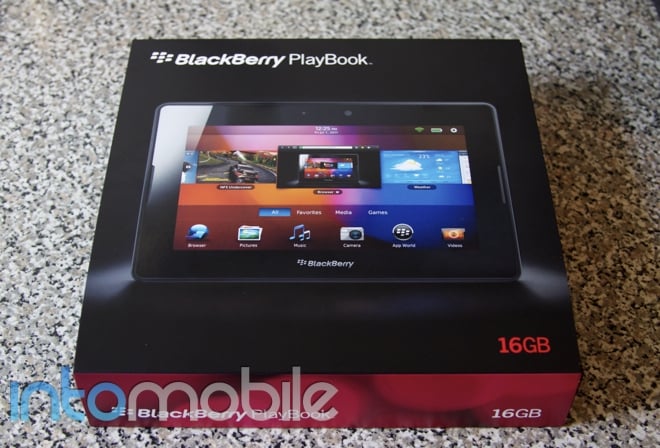 We finally have a retail-ready BlackBerry PlayBook unit in our hands, so we decided to give it a quick unboxing video to show you all what it will look like once you’re able to go out and buy one of your own.

The packaging is actually quite nice. As you’ll notice from the start, it’s just a very clean black box with a decorative sleeve around it showing off the PlayBook itself, as well as an image of the new BlackBerry Tablet OS. The box is filled with the tablet itself, a USB/microUSB cable for syncing with your computer and a charger. RIM was also good enough to include a protective neoprene sleeve for the tablet so you’re not rushing off to buy a case immediately after opening this thing up.

I’m not sure if this will be the case with retail versions, but once I powered this thing on – as most of us saw on the live-stream video this morning – I was prompted to perform a software update to version 1.0.1.1628. It took about 15 minutes to download the update, and another 3-5 minutes for it to install. It does test your patience a little when you’re ready to just dive right into the software.

You’ll also have to log in with your BlackBerry ID, or create one in order to get going. Once you’re all set up and ready to go, you’ll get a quick tutorial on the PlayBook for gestures and other tricks to using the device.

We’re going to go a little more in-depth later, but check out the unboxing video below! Also, stay tuned for our official review coming soon.

The Sprint Samsung Replenish is an eco-friendly Android

Sprint is making a big push with its green initiatives and it has just launched its first eco-friendly Android phone,...