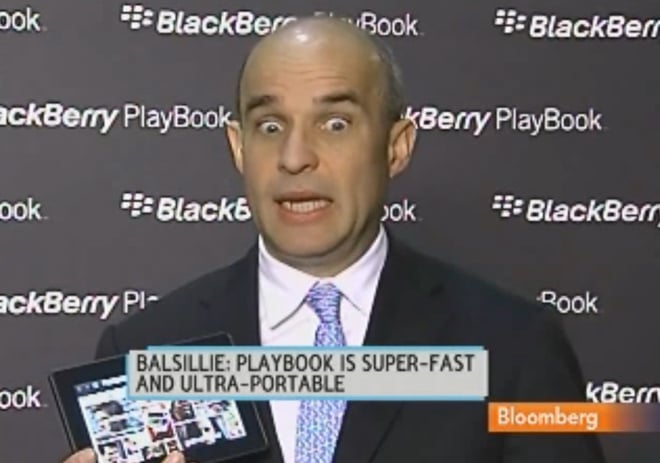 Jim Balsillie stepped up to the plate in an interview with Bloomberg recently, in the wake of disappointed BlackBerry PlayBook reviews. Contrary to the picture above, Balsillie was actually confident, composed, and very optimistic about the future of their tablet and its new operating system. He put a lot of weight behind the updates that are yet to come, and feels the PlayBook stands a great chance at snagging enterprise market share.

When questioned about the reaction of his colleague, Mike Lazaridis, to the subject of BlackBerry security in India, Balsillie said, “I don’t think people realize just how great the threat matrix is of cyber-threats, both enterprise and consumer.” It’s worth reiterating that the problems in India are because BlackBerry is so secure that the government there can’t tap the wires. When asked if the PlayBook was rushed to market as so many of the reviews iterated, Balsillie replied that it wasn’t fair (sound familiar?), and that despite the status of RIM-made and third-party apps, he claims the web browser will be the overwhelming use case for the tablet.

In terms of placement of the PlayBook within the tablet market at large, Balsillie had this to say:

“I talk to CIOs every day, and they’re sweating this issue. You hear a lot of this phrase… ‘consumerization of the enterprise,’ but in fact, I’m not really seeing that. I’m seeing it as a paradox, they say ‘I want consumer, innovative stuff, but I need it to enterprise-grade standards of security, reliability,  manageability, and scalability.’ I think our focus is resolving that paradox, not denying one half of it.”

When put like that, it’s easy to see where the PlayBook is coming from. If you’ve yet to see our hands-on, the PlayBook is a 7-inch tablet with a 1024 x 600 touchscreen, twin cameras (3 megapixels and 5 megapixels), with a new QNX-based operating system powered by a dual-core 1 GHz processor and 1 GB of RAM. Wi-Fi b/g/n, GPS, and 3G via Bluetooth tethering to a smartphone are all included. Launch is set for April 19, with 16 GB, 32 GB and 64 GB models to be available for $499 and up.

Here’s the Bloomberg interview with Balsillie; what do you guys think, are his defenses apt? Is his optimism well-founded?

Microsoft's mobile strategy is a bit odd. First they sold licenses of Windows Mobile to handset makers. That business model...