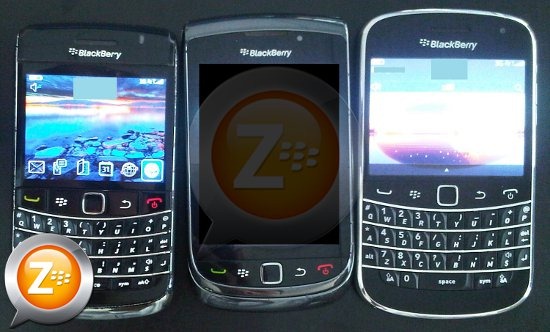 We’ve seen glimpses of the upcoming touchscreen BlackBerry Bold here in North America, but RIM’s a global company, it looks like they’re getting ready to launch it worldwide. A batch of hands-on pictures of the Bold Touch 9900 (code-named Dakota) have surfaced in Latin America, where it was compared to the Bold 9700 and Torch. On the other side of the Pacific, Australian carrier Telstra is reported to be listing the Bold Touch in its inventory alongside the Motorola Xoom and LG Optimus Black. According to the Latin America source, OS 6.1 is still reportedly unstable, which isn’t great news if the Bold Touch will be announced at BlackBerry World next month.

Based on what we’ve seen in leaked spec sheets, the BlackBerry Bold Touch will have a 2.8-inch 640 x 480 display, 768 MB of RAM, a 1.2 GHz processor, 8 GB of storage memory (plus microSD memory card), and a 5 megapixel camera with LED flash and 720p video recording. The really new additions will be a near-field communications chip for contactless payments and Bump-style file transfers, plus a magnetic compass to support augmented reality apps. As you can see, the BlackBerry 9900 looks a lot like the Bold 9000 from the face-on, but the side and top keys have been shuffled around, and the rear battery door has a distinctly different style.

The Bold Touch will no doubt appeal to those who like the tried and true BlackBerry form factor, and the smaller screen plus bigger battery than the Torch (1230 mAh) guarantees it will be able to get through a busy day. Anyone interested in picking this one up when it launches sometime this summer?