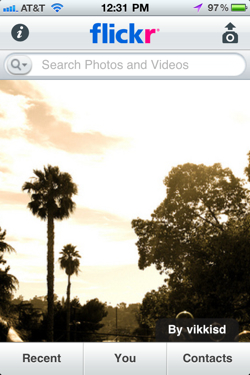 The best camera is the one that you have with you, so it’s no surprise that the iPhone 4 is quickly becoming the number one used camera for Flickr members. It’s not surprising, either, since it won’t be the first time that the iPhone takes the top spot as most popular camera used on Flickr. Two years ago, the iPhone stole the top spot from Canon’s Rebel XTi, which is quite a feat. This time around, the Apple smartphone is preparing to steal the Nikon D90’s thunder.

As smartphone cameras become more advanced and photo quality consistently improves, point-and-shoot cameras are quickly being replaced. The Nokia N8, for example, takes arguably better photos than a large chunk of the point-and-shoot market today. Smartphones like the iPhone 4 and Android devices also have apps which allow users to snap photos and upload them to Flickr immediately. With a point-and-shoot camera, a user has to take a photo, get to a computer and upload them from the camera’s memory card, then get them up onto Flickr. It’s just a huge inconvenience.

While Flickr does have apps that allow photo uploads to its service, TechCrunch says it really missed out on an opportunity to make bigger things happen:

It also speaks to just how badly Flickr has dropped the ball with regard to mobile. We’ve previously delved into this topic when recounting a former Yahoo employee talking about how Flickr should have built a service like Instagram, but simply couldn’t due to bureaucracy. Flickr has long had the data to show that smartphone cameras were starting to dominate the market, but they really didn’t do anything about it.

It’s unfortunately, really, given the rate at which the iPhone seems to be overtaking other cameras and smartphones in terms of popularity, but maybe Flickr will get around to it one of these days. In the meantime, there are dozens of photography apps on the iPhone that take brilliant pictures and allow you to share to services like Facebook, Flickr and Twitter. And to think that just a few years ago, there were plenty of folks who mourned these do-it-all devices because they weren’t good at the things they did (i.e. make phone calls, be multimedia players, take photos, etc.).