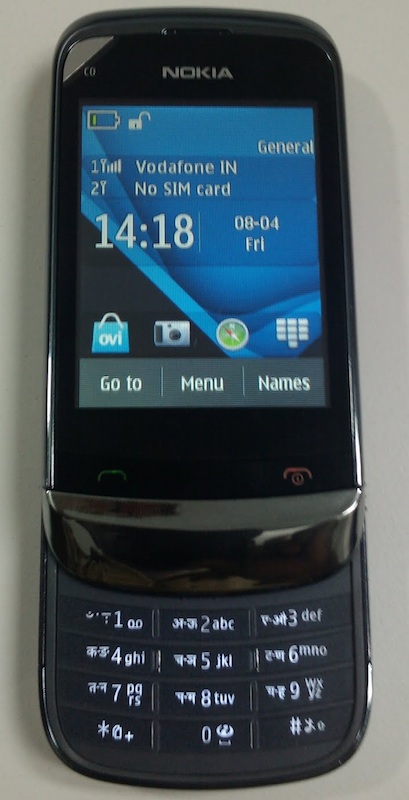 A little over a month ago we brought you images of Nokia’s yet to be announced Touch and Type Slider. The “Touch and Type” brand name is what Nokia calls their feature phones that run the S40 operating system and also pack a resistive touch screen. You don’t get things like pinch to zoom, and you definitely don’t get the same type of rich applications that are made for the higher end Symbian smartphones, but in a market where touch is considered an advanced feature, people appreciate the ability to poke and prod at their display. Today we’ve got even more images of this device, but it comes in a different color, and according to My Nokia Blog it also has space inside for two SIM cards; it’s called the C2-06. That would make this both the first Touch and Type slider to come out of Nokia, and one of the few handsets Nokia makes that can handle two SIM cards. It’s telling that the images came from India, because that’s most likely the primary market this handset is meant to be sold in. If we had to take a guess we’d say it’s coming to Russia too, and a handful of Asian countries, but definitely not Europe and America.

Will it sell in huge numbers? Yes, that’s a silly question, but the more appropriate thing to ask here is how will it in compete in a market that’s now full of cheap Android smartphones? India’s own Micromax produces a mobile phone that has 3G, GPS, and WiFi, runs Android 2.1, and sells for $150. This leaked slider doesn’t come with a price tag, but we do know it lacks 3G connectivity. When you’re counting your nickel and dimes to purchase a mobile phone you probably aren’t going to pay for high speed data, but it’s nice if you could.

Anyway, keep reading IntoMobile for more information as it flows in about this and other leaked handsets.

BlackBerry smartphones aren't the only ones that have to worry about getting keeping access in India. In a communication between...