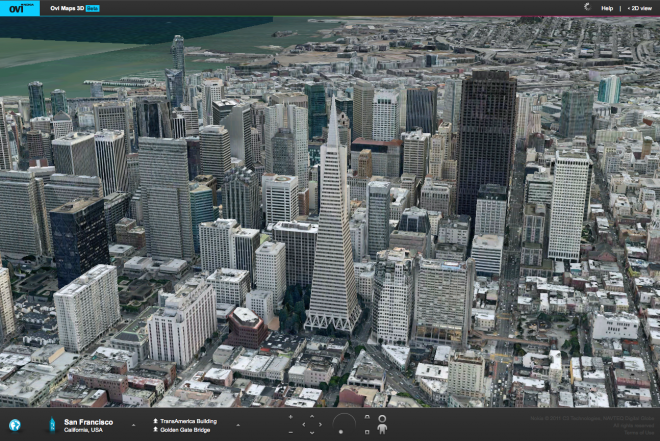 Nokia has just enhanced its Ovi Maps service with photorealistic 3D images of major metropolitan areas. It’s one thing to look at a colored rendering, perhaps even some distant satellite views, but something that might help the directionally challenged would be 3D modeling to give an even better sense of a location’s area and surroundings.

From the sounds of things, it might even be comparable to Google Maps:

Starting with a bird’s-eye view, people can scale up and down and move around objects such as buildings and trees from their desktop, experiencing a virtual but super realistic perspective of new places. Road-level imagery completes the experience with a detailed 360-degree panoramic view of streets.

So now you’ve got the 3D models as well as road-level images with full panoramic views all around — pretty much just like Google Maps’ street view feature. While it’s a great feature to have, it’s only available in select cities right now:

That’s got a few of the major world cities covered, but Nokia certainly expects to get more into Ovi Maps with 3D modeling.

For more details on this new feature, check out the press release on the following page.