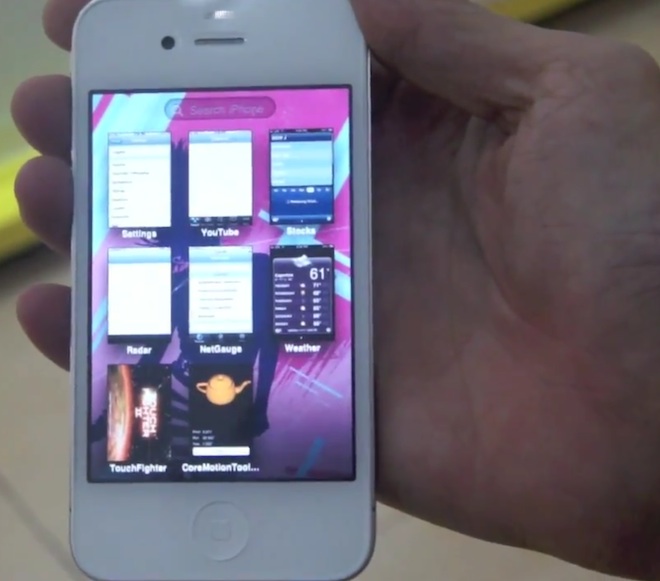 Apple’s set to show off the next version of iOS at the next Worldwide Developer Conference that takes place in June. Many are speculating as to what features will come with the OS, but all we know is that the multitasking user interface needs a complete overhaul and the notification system needs a swift kick in the groin area.

According to a new video unearthed by SlashGear, what you’re looking at above is the new multitasking UI inside iOS 5. It appears that you’ll be accessing it in much the same way that you multitask on iOS today, meaning a double tap of the home button, but now instead of getting a row of icons you can swipe through, you get tiny thumbnails that show your most recently used applications. Double tapping is still pretty lame if you ask us, but we’re definitely fans of this new UI. While we’re not quite yet ready to call this video authentic, we do like what’s being demonstrated.

Updated: According to Chronic of iPhone dev-team fame, this video shows off a build of iOS 4 with un-released features. Macstories corroborates this report and shows a screen grab from the video that reveals the iOS 4 version and its 8A216 build number.

Like we said earlier, we’re going to have to wait a little over a month to get the real skinny on what’s coming to iOS 5, but we’re actually more interested in what Apple is going to do to MobileMe. Right now it’s a glorified bookmark and contact syncing solution that runs you $100/year, making it rather useless in an age of free cloud services and let’s not forget Facebook. Rumor has it that the next MobileMe will cost only $20/year and give users the ability to manipulate every piece of data on their iPhone. That would mean a web based calendar, address book, photo manager, and more. Supposedly you’re going to be able to stream the songs and films you purchased from iTunes straight to your iPhone, but that’s a bit much, especially considering how much hell the record labels are giving Amazon for making a similar service.

Check out a video below of the reported new features but be warned that it’s in Vietnamese.

The long-awaited Sonos Controller Android app has finally landed, so now you can use your Google mobile device to control...