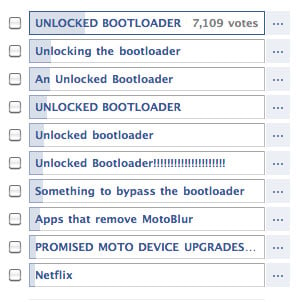 Trying to leverage social media to its advantage, Motorola asked its Facebook fans to name apps they would like to see next from Android. Undoubtedly, Motorola was expecting answers like an updated Netflix or game titles such as Angry Birds 2. Instead, the Android handset maker received almost 20,000 votes for an unlocked bootloader. Over 1,300 are asking for a way to remove Motoblur and another 800 are looking for device updates. Only a mere 600 people were asking for Netflix.

Motorola asked the people what they wanted and they responded in kind. This type of response is not surprising as it exemplifies the type of users that own Android handsets. Similar to the now defunct Windows Mobile, the Android platform lends itself to hacking. People often buy an Android handset so they can root it and flash a ROM to change the operating system on the handset. It’s enjoyable to tweak and try new ROMs. Manufacturers, though, don’t share this enthusiasm and often take steps such as locking down the boatloader to prevent users from modifying the system software. Judging by the response to Motorola’s poll, many people don’t like this practice and are not afraid to call Motorola out in public.

How To : Root T-Mobile G2X with one click – custom recovery coming soon

We're no longer surprised when a brand new Android phone receives root access the day of its release, or even...