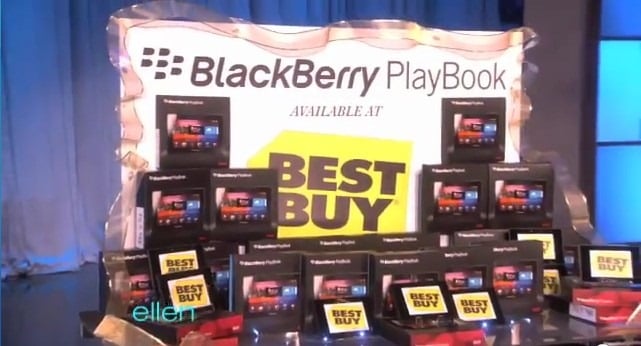 Although nobody was exactly camping out overnight to pick up a BlackBerry PlayBook yesterday, Peter Misek, an analyst at Jefferies & Co., claims 45,000 of RIM’s first tablet was sold on launch day through Best Buy and Staples alone, counting 25,000 preorders predominantly for 32 GB and 64 GB versions. Mike Abramsky, of RBC Captial Markets, largely agreed, estimating 50,000 opening day sales and 600,000 for the first quarter of fiscal 2011. There are also enterprise Misek says that would put the PlayBook ahead of the Motorola Xoom in terms of sheer sales. Of course, neither of them stand much of a chance of toppling the iPad 2 from its pure white throne, but at least they’ll be offering decent alternatives.

The BlackBerry PlayBook is certainly nothing to sneeze at – with a dual-core 1 GHz processor, 1 GB of RAM, 7-inch 1024 x 600 display, 5 and 3 megapixel cameras capable of 1080p video recording, and some killer stereo speakers, it’s a fine tablet. The one-turn off may be the lack of e-mail, contacts, calendar, tasks, and even memopad apps without having a BlackBerry to pair it to. That’ll change in the next two months, but until then, the PlayBook is squarely and exclusively directed at existing BlackBerry owners. Check out our full review, now with a bajillionty percent more video.

Have any of you picked up a PlayBook in the last day or two? Are you liking it despite all of the bad press?