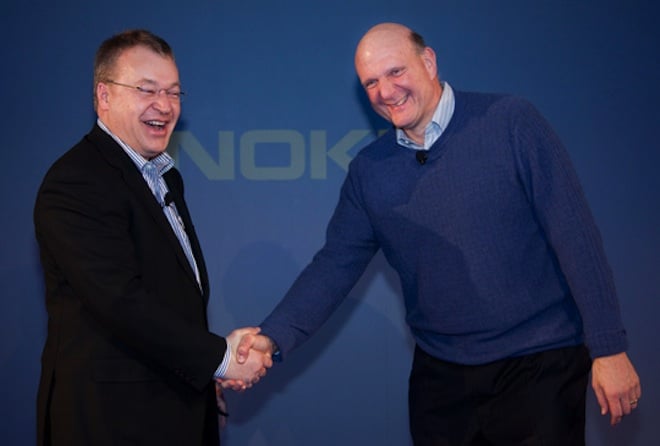 Although Nokia said it would be hooking up with Microsoft in February to produce smartphones with the Windows Phone platform but the companies finally signed an official agreement today.

The Nokia, Microsoft deal revolves around four major points. The first is that there will be a combination of complementary assets, as it won’t just be Nokia utilizing Windows Phone 7.

In particular, Nokia will be bringing its expertise in carrier billing, high-quality mobile photography (just take a look at the N8 for proof) and other categories. The handset maker will also open its own branded application marketplace that will be powered by the Windows Marketplace.

“Our agreement is good for the industry,” said Steve Ballmer, CEO of Microsoft, in a prepared statement. “Together, Nokia and Microsoft will innovate with greater speed, and provide enhanced opportunities for consumers and our partners to share in the success of our ecosystem.”

As we reported before, Microsoft will be giving Nokia “payments measured in the billions of dollars” to adopt the Windows Phone platform. The handset maker was also reportedly considering Google’s Android platform but I’m guessing the search giant didn’t feel comfortable shelling out billions to spur adoption.

The money won’t just be swinging one way, as Nokia will have to pay licensing fees to Microsoft for each phone with the Windows Phone software. There’s no word on how much this is but the software giant makes a point that this will enable the handset maker to “significantly reduce operating expenses.”

There’s also an agreement which will allow the companies to exchange rights to intellectual property. Nokia is getting “substantial payments” with this part of the deal.

So, basically, Microsoft is getting a huge mobile phone partner but it will be paying a lot of money to get it done with mass volumes expected to be shipped in 2012. Sounds good to me, what do you think?