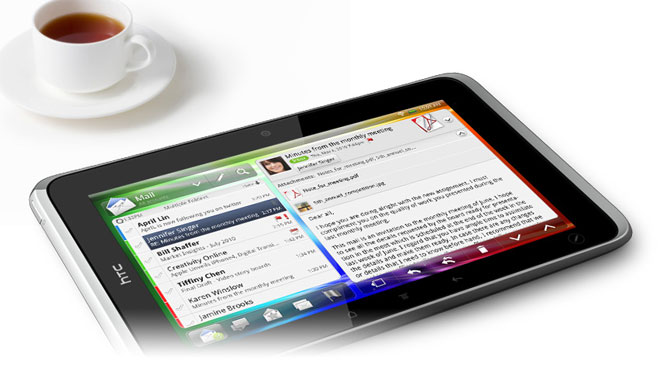 Best Buy confirmed in a statement on its blog that it will be offering the HTC Flyer on pre-sale starting April 25th. The WiFi-only  Flyer will sell for $499 when it hits the retail of shelves of Best Buy. The HTC Flyer is the first Android tablet offering from the Taiwanese manufacturer and joins a growing list of Android tablets such as the Motorola Xoom and G-Slate which debuted this year.

The Gingerbread tablet includes a single core processor clocked at 1.5 GHz, a 7-inch touchscreen display with 1024 x 600 resolution, WiFi connectivity and an aluminum unibody construction. The tablet also ships with a capacitive stylus with a specialized gesture interface called Scribe. At launch, the tablet will run Android 2.4 complemented with HTC’s proprietary Sense UI. The taiwanese company promises an upgrade to Android 3.0 Honeycomb will arrive in the future. No word on when but it will take some time for HTC to update its Sense software to support Google’s latest tablet OS.

The Flyer will compete directly with the Samsung Galaxy Tab and offers a slightly smaller frame than the 8.9-inch T-Mobile G-Slate. It is a whole different beast from the 10-inch Xoom which provides a beautiful display but is not as portable as the 7-inch Flyer. Anyone interested in the Flyer? What do you think of the price tag, is $500 too much for a 7-inch display or is the pricing competitive?

If you want more details on HTC’s tablet device, check out our hands-on review here.

Motorola Droid Pro gets software update but no Gingerbread

The Motorola Droid Pro can now get a software update but it's not the much sought-after Gingerbread release. Still, this...