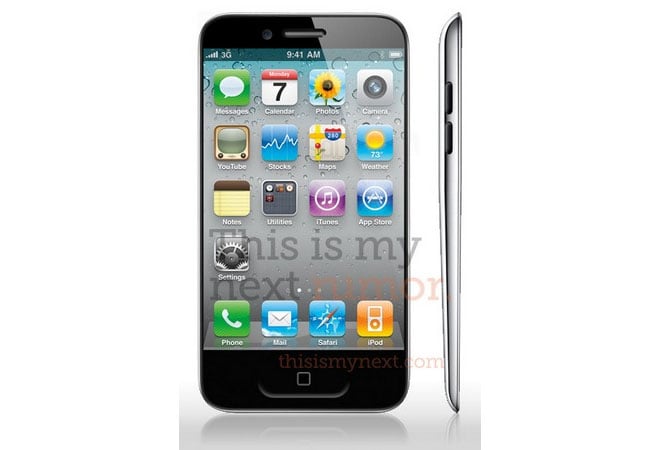 Will the iPhone 5 shed the boxy good looks of the iPhone 4 for the svelte lines of the iPod touch? If this above rendering turns out to be correct, then the answer to that question wold be a resounding yes. A rendering generated by Joshua Topolsky purports to show the iPhone 5 with a thin, tapered profile that resembles the current generation iPod touch. This image was generated by Topolsky using information obtained from multiple anonymous sources.

According to his sources, the next generation smartphone from Apple may include a 3.7-inch display with the same 960 x 640 resolution as the retina display in the current iPhone. This handset may also lose the bezel and sport an edge-to-edge display. The home button is reportedly flattened and enlarged which suggests it may used for touch gestures similar to the gesture area on the Palm Pre plus.

The smartphone may also included NFC technology as well as a Qualcomm Gobi chipset that supports both CDMA and GSM cellular technology. This world phone capability was hinted at by Verizon Wireless CFO Fran Shamm during Verizon’s latest earnings conference call. Shamm let slip the next Apple device to hit Verizon will have global capability.

Remember, this image is a not an official rendering and these details are based on leaked information which may or may not be correct. Keep that salt shaker handy while you consider whether you like this new design or not.

[Via Engadget and This is my next]