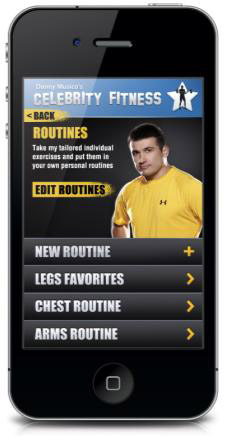 If celebrities can have their own iPhone apps, why shouldn’t their trainers? Well one of them is taking that route – Danny Musico, who is also a former Super-Middleweight Champion of the World.

His upcoming application “Danny Musico’s Celebrity Fitness”, set to hit the AppStore on May 1st, will share all the tips and tricks Danny used to train his prestigious clientele, including Toby Maguire, Leonardo Dicaprio, Jessica Simpson and the entire cast of HBO’s “Entourage” just to name a few.

Included with the app, users will get training videos where Danny will show them very precisely how to obtain the right form, download-once library of content (so you can explore it even while offline), as well as nutrition and dietary tips to get “celebrity fit.” Moreover, Danny will also talk about supplements and other nutritional aids.

In case you didn’t know, Danny is an impressive person. In 1991, just before he was due to compete in the Olympics as the boxing team’s captain, a reckless driver hit him as he walked across a street, ramming his body through a metal bus stop before running him over. Doctors initially told him that he would never walk again, but after a full year in the hospital and nine major surgeries, Musico was able to make a full recovery and just a few years later won the Super-Middleweight Champion title. Now that’s an attitude. 🙂

Usually we hear about successes of iOS and Android apps. Today our focus is on a Symbian app, eBuddy Mobile...