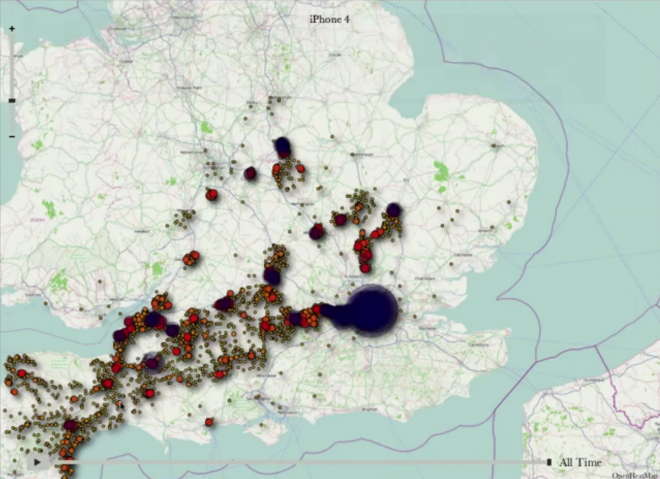 Over the last week, privacy concerns have led to a bit of paranoia regarding the iPhone and its ability to record and store accurate location data for its users. It was discovered that the iPhone and iPad 3G would log user data and time stamp it, revealing a relatively detailed map of where the user has been and when. The iPhoneTracker app allowed users to download the info from their devices or computers just to see what the iOS devices had been recording, and some of the results were a bit unnerving.

More recently, Steve Jobs addressed a concerned user’s e-mail saying that Apple does not and never has tracked its users’ locations. It was brief and curt, as Jobs’ e-mails usually are, so it left us with more questions than answers. This time around, Apple has finally decided to clear the air on its own site.

Here are some of the Q&A items on its site:

2. Then why is everyone so concerned about this?
Providing mobile users with fast and accurate location information while preserving their security and privacy has raised some very complex technical issues which are hard to communicate in a soundbite. Users are confused, partly because the creators of this new technology (including Apple) have not provided enough education about these issues to date.

So, Apple isn’t logging location — it’s maintaining a database of hotspots and cell towers around your current location. Oh! Well, I guess the fact that it’s basically logging your location is just incidental and not intentional. Great. Anyone who has downloaded the iPhoneTracker app to view their location history knows this is a load of crock.

Just how well is Apple playing the spin game this time around? Well, if the iOS devices really weren’t storing your data, why would the following update include stopping all those processes?

Software Update
Sometime in the next few weeks Apple will release a free iOS software update that:

In the next major iOS software release the cache will also be encrypted on the iPhone.

T-Mobile: $1,000 prize if your iPhone is faster than a Samsung Galaxy S 4G

T-Mobile has issued a challenge to folks living in the city of Seattle. If you can prove that your iPhone,...