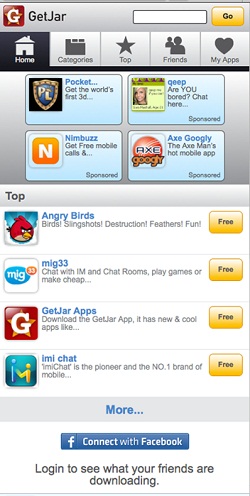 GetJar has just unveiled a major revamp of its mobile website and the world’s largest independent app store is going to integrate some social networking features thanks to Facebook Connect.

If you don’t know GetJar, it’s a large app store which provides tons of free apps to BlackBerry, Java, Android and other smartphones and feature phones. It can get by with offering free apps because it sells advertising on its massive traffic – we’re talking 1 million unique visitors a day and growing.

GetJar is using Facebook Connect to enable users to share and discover which apps they are using. You’ll be able to post to your status about which app you’re downloading, as well as let friends know what you like and dislike. There’s also granularity in what posts to your wall, so you won’t have to worry about spamming your friends.

“Now that users can share apps with their friends on Facebook, recommendations are really a bit old school,” said GetJar’s CEO, Ilja Laurs, in a prepared statement. “Our recent research clearly showed us that what consumers care about is what their friends are downloading and using, not what we as an app store think they should download.”

The GetJar interface has also received a revamp to go along with these social features and it looks slicker and easier to navigate. We had a change to play with it a little while ago and we liked the feel of navigating the store.

The app market place is heating up, as Amazon has just entered the space for Android and GetJar will face tons of competition. The company firmly believes that it will continue to be successful – particularly in the emerging markets – because of its connection with users and the fact that it offers free apps, which are always appealing.

Check out the store on your mobile browser and let us know what you think.

Hey, do you remember Viewdle? We saw them at Mobile World Congress showing an app that would locally store facial...