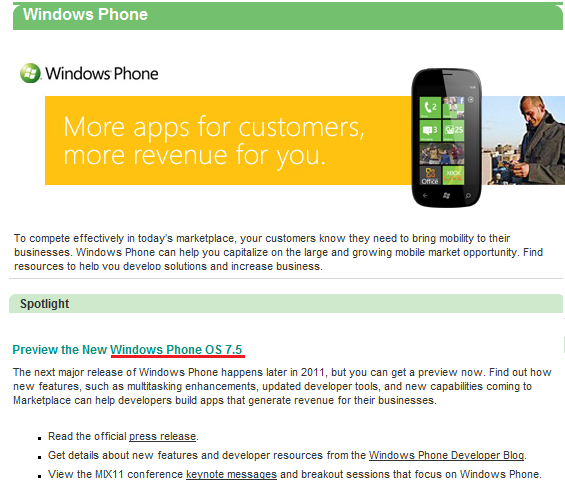 Microsoft’s Windows Phone platform is quite young compared to Apple’s near 4 year old iOS and Google’s 2.5 year old Android. Windows Phone has already had a minor version bump, one that enabled customers using a CDMA operator to enjoy the OS as well as throwing in some copy and paste functionality. The update didn’t go as smoothly as Microsoft would have hoped, with Samsung devices in particular turning into bricks when trying to load the latest version. The desktop software and office suite giant says that they’ve fixed the problem, and we hope they’re right, because later this year “Mango” is going to come out, and that promises to be the first real major improvement to the platform since it first hit the market last fall. Mango is going to bring third party multitasking to the table, along with a new web browser based on Internet Explorer 9, and a whole host of other small improvements. Now what should Microsoft call this? Windows Phone 8? No, that’s too far ahead. Windows Phone 7 Service Pack 1? No, that’s too lame. According to an image seen on Microsoft’s partner page it looks like Mango will be called Windows Phone 7.5, which isn’t exactly the most inspiring thing a marketing department can come up with, but then again some of you will remember Windows Mobile 6, 6.1, and then finally 6.5.

Does any of this matter though with Microsoft trying to keep each and every Windows Phone up to date with the latest software? Just like iPhone owners always get the latest version of iOS, Microsoft is trying to do the same thing, which shouldn’t be too much of a challenge since they dictate the exact hardware specifications device manufacturers need to use to get a Windows Phone license. The same can’t be said about Android devices. You’re a slave to your hardware maker.

Verizon Wireless is working overtime to fix its 4G LTE network which has been down for almost 24 hours. The...