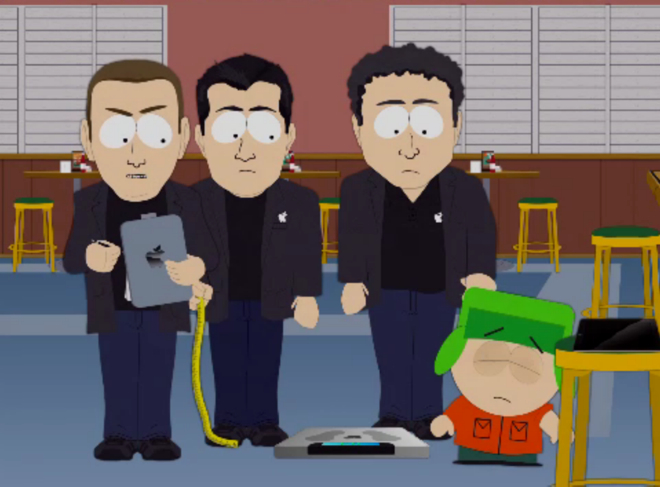 South Park certainly didn’t waste any time in poking fun at the Apple location controversy. Recently, Apple has come under fire for its iPhone and iPad 3G tracking practices. It turns out that the devices will log and record its location – invariably logging its user’s location, too, – and included time stamps. Using an application called iPhoneTracker, iOS users were able to generate maps that showed detailed location histories stored within the phone or the computer to which it was synced.

Naturally, Apple cleverly denied this with some BS spin about collecting data about local wireless towers and Wi-Fi hotspots. Apple basically said that it wasn’t tracking its users, instead it was compiling a database of cell towers and hotspots – that users just so happened to be within range of the infrastructure is incidental. Right. I’m sure there are a hundred other ways to determine the locations and strength of towers and hotspots.

Anyway, South Park poked fun at the issue where poor Kyle unwittingly agrees to be tracked by Apple by ignoring the terms and conditions of an iTunes update.

Check out the video clip below. It’s pretty hilarious.

Some questionable apps have passed through Apple's filtering process in the past, like that weird baby-shaking application, but luckily the...